Baseball is as harsh as it is triumphant. I think back to Tuesday as I was riding on a BART train to SF to watch Game 5 of the ALDS. Between stations, the train stopped. Something was on the track. This was 30 minutes before the first pitch would be thrown in the biggest game in the history of the franchise and I was trapped. But it was a feeling that offered some odd comfort of familiarity. Before the train even stopped I was trapped. I was lost in thought of where one more win would take my team. I was fighting off thoughts of what one more loss would do to my ability to enjoy the sport I love. 1,491 innings in 2010 would come down to 9. And after the years of unmemorable moments, clinging to the desire for one season of prolonged memories held me in a prison of anticipation. Then the train started moving again.

The train started moving again and there was relief. Not only because I would arrive to see the game. But because I would be watching something I had never seen from my favorite baseball team. It was going to be fun. It was going to be fun because this team was worth a spot in my memory banks, win or lose. There was a destination and the Rangers were going to arrive. When Elvis came home on a ground out to first, the train was moving. When Nelson Cruz turned a surely-this-is-gone shot into a double and then a questionable steal attempt into a run, the train was moving faster. When Vlad Guerrero scored from second on a ground out, with Cliff Lee conducting, you knew the Rangers were going to get there. It had taken 39 years in Texas. That's 56,862 innings to play 9. And finally, on a national stage, as Ian Kinsler hit a icing-on-the-cake home run, our Rangers had arrived. Right on schedule.

There's still one more journey to take before the Rangers reach the biggest stage of all. And of course it was going to be the Yankees that stand on the tracks. The Rangers were never not going to face the New York Yankees in their first ever ALCS. And, frankly, I wouldn't have it any other way. I wouldn't be any less excited if it weren't the Yankees--and I'd probably be more hopeful of the Rangers chances if they were playing a surprise Detroit Tigers or Chicago White Sox team or some such--but in some ways, it would sort of feel like a letdown.

I need Elvis versus Jeter. I want Feliz versus Rivera. I want to beat A-Rod and Teixeira. Hell, I want to beat the tool shed himself, Greg Golson. I desire vengeance for the late '90s Rangers. For Juan Gonzalez. For Johnny Oates. If there's a memorable trophy presented to the Rangers in these next few weeks, I want to see it hoisted in Yankee Stadium. In case you've forgotten, the Rangers already have won a trophy this season. They're the reigning Silver Boot recipients. But you know what is much better than the Silver Boot (besides anything)? The William Harridge Trophy.

For the remainder of what is in store this year the Rangers are going off map. But I have faith in the transit. The train, at long last, is moving. All aboard!

Why The Rangers Will Win: Because the Rangers are nearly equally as talented, skilled, and have the ability to produce as the New York Yankees. Make no bones about it, the Rangers are the underdogs here, in the minds of the media, the nation, and likely in ability. But of the star-struck media, the minds of the nation, and ability, the one that actually matters is ability and the Yankees lead in ability is by such a slim margin that the fact that the Yankees have to play four of these games on the road practically negates their advantage. So while you'll read of what an easy time the Yankees have in getting back to the World Series to face the Phillies (the Giants are also being portrayed as an afterthought), the series itself is practically a coin flip. The Yankees are playing this thing like it's a six game series because they're terrified of Cliff Lee, and rightfully so, but that means they absolutely have to win four of six. That's like winning two consecutive three game series and with three of those at the Ballpark and three of them at Yankee Stadium, I'm not so sure I like their chances to do that. And if they can't do that, then it's Cliff Lee at the Ballpark in Game 7.

Why The Rangers Won't Win: A coin has two sides and the Yankees side of the coin might be slighted weighted. I don't buy into the mystic of the Yankees as a reason the Rangers won't win but that's what is going to be sold to us. I think there could be something said about experience, but the Rangers just got five games worth of the best playoff experience possible. I don't think they will be intimidated when the series goes back to New York but there might be something to the fact that they haven't played in Yankees Stadium since April of this season. If the Rangers lose, however, it won't be because of history, or nerves, or the stadium, or the city, it will be because the Yankees team outplayed them. You should find comfort in that because if the Yankees team is better, it isn't by much.

P.S. The Rangers are going to win. 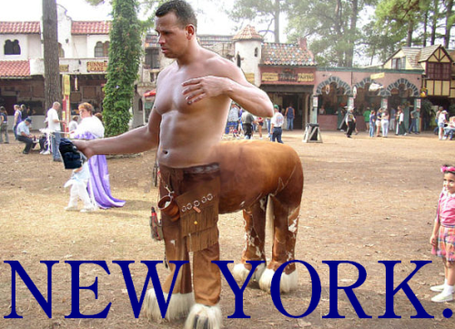