Somewhere, in the dark recesses of Minute Maid Park, a verbose Ron Washington has called his team together. He is inspired. He knows now is the time to strike. He says:

"Gather men. Yes, young men, we owe to baseball an undertaking which has merited the applause of the universe. You have conquered and you will conquer still, because you are prepared for the tactics that decide the fate of battles. You are not unworthy of the men who entered the ranks of a New York Yankee phalanx, and who contended not in vain to be now the proud conquerors of Milwaukee & Florida. To this wonderful page in our team's history another more glorious still will be added, and the bunt shall show at last to his small ball brothers a sharpened sword forged from the spikes of his cleats.

To arms, then, all of you! All of you! And the Houston oppressors and the mighty shall disappear like dust. Let timid base-running depart from among us to carry their servility and their miserable fears elsewhere. This gut is its own master. It wishes to be the ruler of all strategies, and to look on the insolent with a proud glance, not to grovel before them imploring its own wise explanation. It will no longer follow in the trail of men whose hearts hit foul. No! No! No! Tom Hicks gave up on us. Who needs hardware when we battle for footwear? This Boot is ours men. Take it." 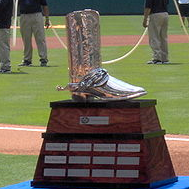 Ron Washington is a scholar of history.

How about some quick Astros facts:

And speaking of awful, if Milwaukee's Miller Park is like baseball in the middle of a Wal-Mart, then the Astros' ballpark centerfield hill & flag pole, Chick-Fil-A "fowl" pole, and the giant toy train makes Minute Maid Park pretty much the equivalent of walking into a Big Lots and discovering there's a Major League Baseball game going on. I don't know why there are so many gimmicks at "The Juice Box," but if I were to wager a guess, perhaps the idea is to distract from the on-the-field product in case of seasons like the one for the home team is experiencing right now. Or money. Yes, it's probably money related.

I mean, who wants to think about their team having the worst offense in baseball by 40 runs in terms of runs created? That's too depressing. More random impedimenta! Snow cones and T-Shirts from the T-Shirt Cannon for everyone! Come on down to the ball yard for some summer fun! There's guaranteed to be annoying shenanigans and ridiculous tomfoolery! Whoopee!

Sure, when talking about the Astros, anything good may sound like a misnomer, but Roy Oswalt is having a fantastic season, and by WAR, Brett Myers has been the NL's 15th most valuable starter this season. Of course, you should probably ignore that Felipe Paulino is right behind him at 16th best in the NL because that kind of ruins my point, but the fact is, since the Astros are already terrible, missing Oswalt and Myers makes them unbearably awful and for the Rangers, that's pretty great. 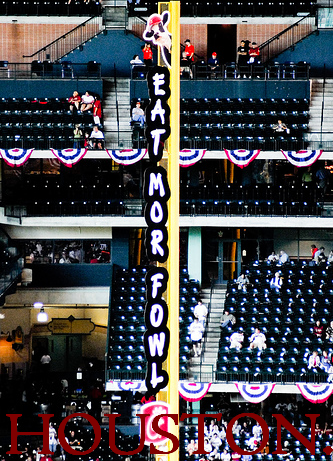