The Pirates have had a bit of a scandal on their hands for the last week or so as they were forced to let go of one of their Pierogi Race participants for bad-mouthing the team's decision to renew the contracts of team president Frank Coonelly, general manager Neal Huntington, and manager John Russell on the social networking website Facebook. This is pretty lucky for the Pirates. It's a great distraction from the fact that the team itself has been terrible. And what is the point of racing European meat pies if not to distract?

As I'm sure you are aware, I'm a big fan of pointless ballpark foolishness and madcap entertainment at my baseball games. I can't get enough of it. Fast food foul poles? You bet your sweet ass. Cars on the field? I've never liked anything more. Needless to say, I was stunned and disappointed to hear the news of one of baseball's treasures suddenly being out of work. So, I decided to funnel my intense feelings on the subject into something constructive. I contacted the Pierogi in question to ask him for his side of the story.

goET: Thanks for meeting with me. How have you been doing since you received the news that you are no longer welcome at PNC Park to participate in the Great Pierogi Race?

Mr. Pierogi: I've been steamed about it, honestly. I just wish the story would end, you know? I'm pretty much fried after having to talk about it all the time these last few days. It still has me boiling mad, though.

goET: Those are certainly puns about the food item that you are. Tell me, what provoked you to say the things you wrote on your Facebook?

Mr. Pierogi: Look, I love the Pirates but they stink worse than a Belarusian kitchen. I'm vocal about that. I'm filled with pride. I'm a fan like everyone else.

goET: I heard you were just one of 18 pierogies vying for a spot in the race each night. How did it feel coming to the ballpark and not seeing your name in the lineup? Was it like that montage in the film Rudy where Sean Astin's titular character would check to see if he had been placed on the dress list for Notre Dame every week?

Mr. Pierogi: It was tough. They would only let four of us race at a time. No one wants to be leftover, you know?

goET: That's understandable. What was your winning percentage in the Pierogi Race?

Mr. Pierogi: Better than the Pirates' winning percentage, I can tell you that.

goET: Will you miss it?

Mr. Pierogi: I already do. I hate this feeling of being left out.

goET: What's next for you?

Mr. Pierogi: I'm interviewing this week to help a contestant win a Quickfire Challenge on Top Chef: D.C. And hey, even though I've gotten a little doughy from just laying around recently, while I'm in town, maybe I'll see if I can beat Teddy Roosevelt at a Washington National's Presidents Race.

goET: Good luck to you. 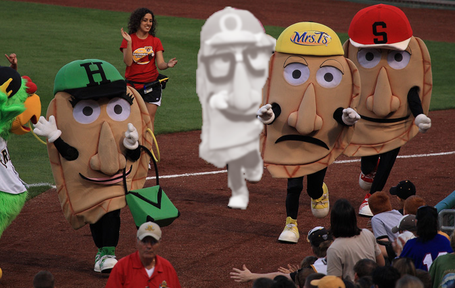 (Editor's note: ghostofErikThompson did not speak to anyone. Also, pierogies cannot talk or answer questions.)

Here's a list of every person the Pittsburgh Pirates have hired to throw a pitch in the Major Leagues for their team this season:

Someone is going to need to explain to me how this has happened.

The Pirates pitching staff is like reaching in for a handful of trail mix and realizing all that's left in the bag are the raisins you've eaten around. Paul Maholm and Evan Meek would be the broken cashew bits you see at the bottom of the bag. They're the only pitchers for the Pirates with a WAR at or above 1.0 (and they're both at exactly 1.0). I also see like four AL West castoffs, the corpse of Hayden Penn, the mummy that is Jeff Karstens, a second, pitching McCutchen, where you just assume the Pirates were like, "Well, it worked in the outfield. Let's get one of those McCutchen's to pitch for us as well." The Pirates are collecting McCutchen's. The best Pirate pitcher in terms of FIP is Steven Jackson and he's only pitched .2 innings. Also, I'm pretty sure he's a football running back for the St. Louis Rams.

And so, handpicked from that illustrious list and the whims of fate, the Rangers prepare to face off against Ross Ohlendorf/Paul Maholm/Jeff Karstens and their combined 1.1 WAR. Let's just start by saying the Pirates are starting a guy named Ross Ohlendorf with an almost self-referential flair. They're so aware of it. That's ballsy. Next is Paul Maholm. Paul Maholm is the ace. Paul Maholm is the Pirates' #1. Paul Maholm annoys me because he asks that we pronounce his name mah-HALL-uhm. But he's Paul Maholm so he isn't very good. And finally, we get to stare at the face of the crippled visage of Death for three hours when Jeff Karstens pitches the finale. I am completely unimpressed and will not be made to feel bad about making fun of these people. The Pirates pitching staff is like 2000-2003 Texas Rangers bad.

However, I just spent a bunch of words making fun of another MLB franchise's pitching and it feels GREAT. 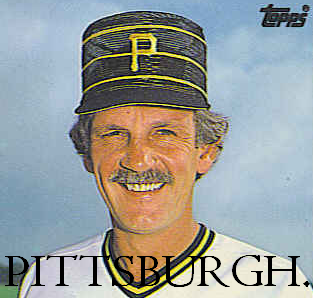