The Astros again? Thanks? I mean, I know I should be thankful that the Rangers are playing the worst teams in baseball in a practically unheard of string of games/luck of the draw. Maybe it's foolish of me, but I'm hungry for more. I want the winning streak to last forever so maybe I shouldn't wish for anything other than games against the Astros. And don't get me wrong, it's not like these wins aren't filling. I'm just starving to see if the Rangers can do it against better teams.

At this point, I'm watching with intent at the family table. I've got a knife in one hand and a fork in the other. I want to see this Rangers team, the one with Colby Lewis pitching so well, the one with Nelson Cruz back in the lineup, the one the bullpen throwing up three or more zeroes a night, the one with Julio Borbon hitting and creating havoc, and the one with Josh Hamilton playing like The One, play against the contenders. I've got my napkin tucked into my collar. The drippings of success will hopefully not stain my shirt of reason, but I want to dine on opponent's blown expectations and begrudged respect.

I know, I know. Be careful what you wish for... But even if it doesn't all go as well as things are going against the National League's worst, I want to know where the Rangers actually stand now against the best teams. But first things first, the Rangers have more feasting to do.

So yeah, the Astros are still bad. Really bad. Nothing's changed in a week since the Rangers last played them--Well, except for maybe only needing one win for the Silver Boot! Watch that run differential, Rangers--and the Rangers should beat them. There is one difference, however. In perhaps one of his last starts as a 2010 Astro, Roy Oswalt is pitching the finale against the team he is most rumored to be traded to, our Texas Rangers. That's going to an interesting game. At least the scouts won't have to pack a suitcase.

So yeah, the Rangers are still not bad. By which I mean they are playing out of their minds. I mentioned in my review of the Pittsburgh series that I don't care about how weak the opponents have been (and frankly, the Marlins and Brewers with Gallardo weren't weak opponents), 11 wins in a row in baseball is all kinds of impressive. I so rarely feel impressed by the Texas Rangers. Yet, here we are.

The Butterscotch Skunk Jon Daniels has to be an early candidate for Executive of the Year, right? I mean, in his off season maneuvering, he essentially took $10 he found in a Tom Hicks couch cushion and he spent $6 of that on a sexy smiling Canadian with a broken ass. Right there, it could have been a failure. In fact, if you had asked me in February what I would have thought of Jon Daniel's off season if Rich Harden had a 6.34 FIP by June, I would have told you Nolan Ryan was probably already wooing Gerry Hunsicker with high fives. Instead, the next three signings proved to be absolute landscape changing dynamite.

Darren Oliver is the reverse Rich Harden signing. All consternation then, pure bliss now. Darren Oliver was signed to a roar of displeasure from Rangers fans partially because of sense memory of early aughts poundings, partially because of age (he's like 45 years old with the spirit of a 65 year old), and partially because the Rangers played their desire to start C.J. Wilson so close to the vest that the move was puzzling at the time. Now Darren Oliver is pitching as one of the top 10 relief pitchers in baseball. He's absolutely anchored the bullpen. I feel like I'm wrapped in a warm blanket every time he comes into a game. He is comfort from the most uncomfortable part of the game.

Then Vlad. Vlad decided this year he would be Vlad again and Jon Daniels got him for not-Vlad price. When Vlad is Vlad he lays waste to those in his path. He's destruction incarnate. He was signed to be a presence in the middle of the order and he is. But instead of just being a talisman of fear and past success, he's been a fringe MVP candidate. With Nelson Cruz out large spells, one wonders where this team might be now without Vlad. You'd find yourself shuddering like a pitching hearing the phrase, "Now batting, VLADIMIR GUER-RER-O." I've completely forgotten he was an Angel.

Then Colby Lewis. Ace-like production for comparative pennies. Colby Lewis was a marvelous idea that has worked out for a franchise where marvelous ideas have been few and the few that have been work out practically never. If Colby Lewis doesn't crater, he's the signing of Jon Daniel's tenure. 2 years/$5M + $3.25M club option. It blows my mind.

Each of those guys might have a claim at best signing of the off season. Jon Daniels took a barely there off season budget and found a way to make dramatic, positive moves. And the headliner hasn't even worked out. That's fantastic work. 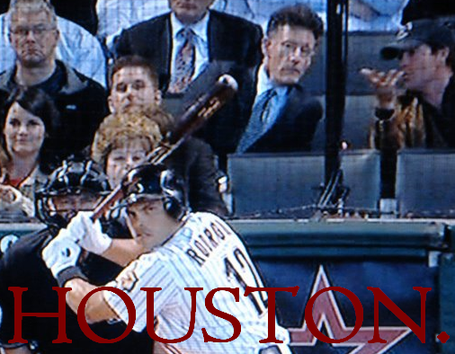