It's almost like now that a real challenge for the Rangers is here, I don't have anything to say. Of course, that isn't true, I have plenty to say, but what should be said? It's almost too simple. Just win. The Rangers are faced with their biggest challenge of the season so far and the last few weeks of dominance have led them to this place. This is a real test. This is perhaps the first true test for this team since they finished getting swept in Minnesota at the end of May. Just win. Since that first day of June when they had slipped into second place, the Rangers have gone 20-5 and reclaimed the division lead and a true believability of their worthiness of being a contender. Now they need to prove it against the one team that probably doesn't have any reason to believe it. Just win.

That's why this test is different. This test is different because it's the Angels. The Rangers weren't too far off this pace last season and it was right around this period in time that the Angels began their quick ascend to the top of the division and left the Rangers in their dust. Nothing much will change if the Rangers don't win this series. They won't suddenly stop being a contender. They can get swept and still have a division lead of more than a game entering the month of July. Perhaps that's something. But as a Rangers fan, where I should take comfort in lowered expectations, I'm ready for positive worst case scenarios to exit the lexicon. Just win. Now that the play-acting against the National League has ended, it's time to get down to business. Just win. It's time to get Elvis into the All Star Game. Just win. It's time to watch Josh Hamilton complete perhaps the greatest month in Texas Rangers history. But most importantly, it's time to just win.

The Angels ability to win consistently even though they do so against the grain of their expected outcome based on statistical models is something that has confounded enough people that it's now a joke. The Angels don't beat their pythag because they rubbed the horn of the last unicorn. The Angels aren't clutch because they found a leprechaun living in the rocks in center field at Angel Stadium of Anaheim and his pot of gold was magical BABIP. The Angels don't actually have angels in the outfield. The fact of the matter is the Angels just capitalize on mistakes. Maybe it's the personality of the team instilled from the manager or the confidence of being a winning team, or all of the other maybes that are tossed out there in an attempt to explain the Angels, but here it is, if you don't get the Angels out when they give you the opportunity, they will make you pay.

So when I read that Jeff Sullivan posted on the Lookout Landing Twitter that, "Angels hitters have a .699 OPS in low leverage situations, .726 OPS in medium, and .861 OPS in high" it becomes clear that the modus operandi for Angelball is to make you suffer for your insolence. "How dare you offend the baseball Gods with your error," they might say as they round the bases for a grand slam after a routine inning-ending double play grounder went for no outs. Guess who leads the American league in clutch wins (2.31) with almost a full win over the nearest AL team (hey look, it's the Rangers at #2 with 1.32)? It's the Angels of course.

The Angels will never make it easy.

Ah, but then, that's kind of the Angel's "strong" suit. They have had decent starting pitching. They just haven't hit well and they aren't fielding worth a damn. Plus, the Rangers have a not-so-secret weapon in the form of Josh Hamilton. Let's take a look at some of the things Josh Hamilton has done in his monumental June:

He's batted .470 and his OBP is .495 for the month. Essentially, for an entire month, Josh Hamilton has reached base every other at-bat. The following are some baseball players who have an OPS for the month of June worse than Josh Hamilton's June SLG of .850:

You know, practically an All-Star team. 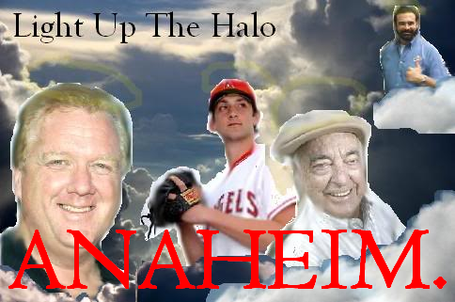 Role Model: All of the Francisco Rodriguez's before and after him