Have you ever seen a movie or TV show where there's this guy, the protagonist, and he meets a lady and they start to hit it off and they clearly have chemistry and it's pretty evident that they're destined to be together but then there is this other guy and he's also into the lady and he's really cool, and new, and the lady is flattered by this and this flattery makes the first guy pretty jealous and while the lady really likes the first guy more, his jealousy of the second guy is really off-putting so the lady starts to pursue the second guy even though in her heart it doesn't feel quite right because she knows deep down the first guy was the guy for her but she just can't seem to make herself believe it so she goes through the motions with the second guy right up until the last possible moment, either via a wedding or possible consummation, when after many a montage of self discovery and copious planning with his male contemporaries, the first guy comes back with a grand romantic gesture, finally proving his love, which allows the first guy and the lady to let their triumphant victory over life's obstacles show that we should never give up on the pursuit of true love as their union rings throughout the land and seas?

Of course you have.

It's called a love triangle.

The love triangle is the trope of EVERY DAMN PIECE OF FILMED ENTERTAINMENT EVER.

This goes for baseball as well. Think about it. Felix Hernandez is the first guy. The Mariners are the lady. Cliff Lee is the second guy. The sooner you let true love take hold, Mariners, the sooner Cliff Lee can be available to the Texas Rangers as a sexy, sexy rebound relationship. You can't have both, Seattle. That's not the way these things work.

Now, that's not to say if the Mariners get swept that they're done. Early June is still early June. However, if the Mariners do get swept or lose three of four, they're looking at being 11 or 12 games out of first place. They would have to play .650 ball for the rest of the year to get to 90 wins. That's the equivalent of them playing as well as Tampa Bay has these first two months for the last four months of the season. So, even if a series loss doesn't officially kill the Mariners' season, it probably kills the hope.

With the understanding of the circumstances surrounding this series, and most importantly, with Cliff Lee and Felix Hernandez going the first two games, the Rangers need to be careful about napping on an opponent that might be swinging in desperation.

One of the more surprising members of the team that should help the Rangers try to avoid sleep walking through this series is Darren Oliver. Darren Oliver currently has an xFIP of 2.44 (good for 6th in baseball for a reliever) and a WAR of 0.8 (good for 12th in baseball). That puts Darren Oliver squarely in the argument for top 10 relief pitcher in baseball this season and that includes closers. Despite the expectations of the naysayers when he was signed, Darren Oliver has been monumental for the beleaguered Ranger pen. With C.J. in the rotation, and the bullpen consistently overworked, Oliver has been the very definition of a windfall.

The opposite of the definition of a windfall has been the Rangers on the basepaths. The Rangers are second worst in baseball in caught stealing with 24. That means the Rangers have almost given away an entire baseball game in outs relinquished on steal attempts. Vladimir Guerrero is attempting steals. That's crazy. The Rangers hate outs and want you to take them off their hands. Dirt cheap. Strike one out, get one free on the bases. 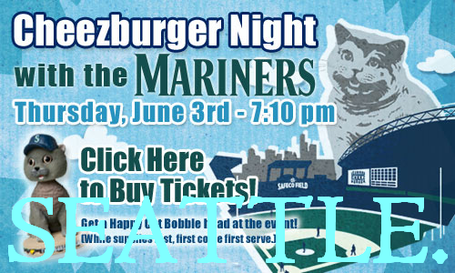