This is a big series. Well, they all are, right? Well this one is especially big. Let me throw out a few scenarios. After Sunday, here are the possibilities the Rangers face:

The nice part about all of these scenarios is, regardless of the outcome, the Rangers still lead the division. Of course, having the lead they've fought all season to get to 5 games suddenly reduced to 1 game hardly seems like a consolation prize worth accepting. If the Angels happen to win this series 3 games to 1, while the lead in the division is reduced to 3, it was at 3 1/2 just five days ago. That wouldn't exactly be fun but that's pretty much where we were not too long ago. It wouldn't be a reason to panic. So you see, this is a big series, only it happens to be big for the Anaheim Angels. They are the team that needs to show that they aren't going away in this race. It's on them to prove that they can be a factor. But, for them to truly gain on the Rangers in a way that will open some eyes, they need the sweep.

The thing is, though, a sweep for the Angels is the least likely scenario. In fact, if you check out Robbie Griffin's Series Expectations post on SB Nation Dallas Fort Worth you'll see that the most likely scenario is that the Rangers win the series three to one. The theories of least likely and most likely don't play the baseball games, however. While this is a big series for the Angels, it's also a big series for the Rangers to push their weight around a little and make sure the Angels realize why they're 5 games back at the moment. Simply put, the Rangers are the better team and they need to show the Angels that.

Match-up wise, Cliff Lee against Jered Weaver might be as close to a push as you'd expect with anyone going up against Cliff Lee. There are not many pitchers in the AL that approach Cliff Lee this season but Jered Weaver might be one of them. He's been fantastic. He's pitched twice against the Rangers this season. On May 18 he had perhaps his worst start of the season in Arlington against the Rangers. And then on July 1st he had one of his best at Anaheim Stadium. Hopefully start number three goes as well as number one did at the Ballpark. Cliff Lee has faced the Angels once this season. On May 28, in Anaheim, he struck 10 and gave up 2 runs as the Mariners won 3-2.

C.J. Wilson has faced the Angels twice this season. He also had his worst start of the season on May 18. On July 1st, facing Jered Weaver again, he had a fairly average 5.2 inning, 4 walk, 2 run game in which the Rangers lost 2-1. Joe Saunders has not yet pitched against the Rangers this season but, now that he will, it is good news because Joe Saunders is not good at his job.

Ervin Santana has also not pitched against the Rangers this season. I get him mentally confused with Ramon Ortiz who used to torture the Rangers and then be not good against every other team. Ervin Santana however has been pedestrian against the Rangers in his career but has been a C.J. Wilson-esque performer this season in terms of value. He's a solid #3. He's going up against Scott Feldman who is a shaky #5 right now. He faced the Angels on June 29 and was terrible. This game favors the Angels the most out of any game in this series.

And finally, it's the battle of the fatties! Tommy Hunter is fun-fat. He's got that charming red face southern look to him. He wears it well. He's what Santa Claus looked like when he was 24. He also takes the ball and wins baseball games. Sean O'Sullivan is gross-fat. All chins and rolls. He has a charmless portly bourgeoisie about him. It's as though his face demands that he's gotten fat and happy off of the back-breaking labor of others just to keep the old money in the family. He takes the ball, puts mayonnaise on it, and eats it. I'm pretty sure I've come to this opinion simply because our fat guy is ours and their fat guy is an LA Angel. 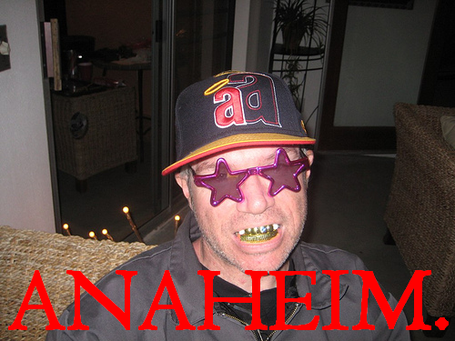 SBN Angels Blog: Halos Heaven (The regret of curiosity will loom large if you venture there)