Honestly, I'm ready for the All Star break. Not because I'm looking forward to the Home Run Derby (which, by the way, I'm offended that no one has invited Elvis). Not because I'm excited about the Futures Game (Martin Perez isn't even going to be there so what's the point?). Not even because I'm looking forward to the Mid-Summer Classic (though, for the first time in years, I do actually care because ELVIS!!). No, much like a veteran secretly glad that he missed the All Star squad, I'm just happy to get a breather.

There's a part of me that's really enthused at the thought of having three days in which to bask in first half success without having to worry about a game that night. Eventually, after riding the Texas Giant all day, you want to take a moment to relax with a deep fried turkey leg and laugh at the picture of you looking silly on the roller coaster ride.

I hope the Rangers aren't ready for a break because they've got four more winnable games before Monday that they need to plow through. Then, rest up, because the roller coaster of the second half has soaring heights and cavernous dips. The goal is to make it off the ride with a smile on your face. Try not to vomit.

The Orioles are the worst team in the American League. The Rangers should beat them. Winning three of four is the minimum of my expectations. However, let's say they don't meet this criteria. Let's say they lose three of four. They go into the All Star Game up 3 1/2. They come out of the break facing a schedule that is brutal. Suddenly, it's September 15th and a tough home loss to Detroit has cut the lead to only half of a game. Envision, if you will, Michael Young gets a tired body up from his locker, tells the clubhouse attendant and a couple of random cousins of teammates to leave. He trudges over to Ron Washington's office and asks that he join him but gather the coaches first. Michael Young closes the clubhouse door in the face of the media. Everyone is sullen and quiet. They've gathered without needing to be asked.

Of course, baseball games aren't won by speeches, but I'd dare that team to not win the division. 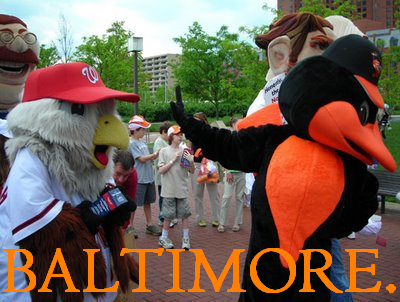