Chuck Greenberg grew up a Pittsburgh Pirates fan. Roberto Clemente figured so greatly in his life that he named one of his children after the Pirates legend and still has a Clemente poster hanging in his childhood bedroom. However, somewhere along the way, in the process of trying to purchase the sad-sack Texas Rangers franchise, he became obsessed with our not so lovable but entirely forgettable losers. If you look east, the New York Yankees have been busy being the New York Yankees. They're the defending champions with the best record in baseball. They're the Rangers unofficial post season rival in the way a gnat once annoyed an elephant for a few fleeting seconds before it was swatted away. For the elephant, whom I am told never forgets, the gnat isn't even a memory. For the gnat, the moment in time when he battled that elephant is the only thing he has in which to measure himself and it ended in abject failure.

Cue Greenberg. With the help of some slick business men, Greenberg has been transformed from a Pittsburgh fan into a Rangers savior. Has it been a deal with the devil? Some would say that is whom he had to slay to get here. Does the clock strike 9:00 PM with Chuck wishing to go back to who he once was? Like you and me, I think Chuck Greenberg understands now what it means to be a Texas Rangers fan. The question now becomes, will he regret it? Whatever the Steinbrenners want, the Steinbrenners get, after all. There is something auspicious and right about bankruptcy Judge D. Michael Lynn giving Nolan Ryan a gift of the book "The Year the Yankees Lost the Pennant." We'll begin to find out starting today just how fortuitous the sentiment was.

For a series with the Yankees the Rangers are catching a bit of a break. Mark Teixeira is missing tonight's game and possibly Wednesday's game as well due to the birth of his child. As an aside, imagine being born and the first thing you see is Mark Teixeira. That would be disappointing. I mean, sure, you're going to live a pretty comfortable life and that's a head start, but man, sorry about your face.

The pitching match-ups favor the Rangers as well. Not just because the Rangers are running out Wilson and Lee, but also because Vázquez and Burnett have been by far the Yankees two worst regular starters (0.4, 0.8 WAR) this season. Vázquez currently sports a FIP of 5.06 and Burnett is right behind him at 4.78. To put that into perspective, Scott Feldman, you know, the guy you all hate, currently has a FIP of 4.61. Favorable match-ups do not mean guaranteed wins, but the Rangers at least have a leg up.

Yes, the Rangers are winless in three contests against the Yankees this season, all of which were played at Yankee Stadium, and had an air of doom to them. However, I hotly contest one of these losses. The game played on April 16, 2010 or as it will forever be known: The Worst Game Ever Played. C.J. Wilson faced CC Sabathia in a battle of abbreviation versus abridgment. The game was played in the grayest, gloomiest of skies where you could almost see the depression looming in the air. That depression would soon rain down and wash out all hopes of reprisal. Not that there was much hope. C.J. Wilson was consistently throwing strikes called otherwise while the Rangers hitters seemingly were trying to get out of the weather as quickly as they could. To think the Rangers once lead The Worst Game Ever Played. In a way, I hope the Rangers play a meaningful game against CC Sabathia to avenge that day. But then again, I'm also not a moron, so I'd be just as happy if the Rangers never face a scenario that could lead to a sequel to The Worst Game Ever Played. 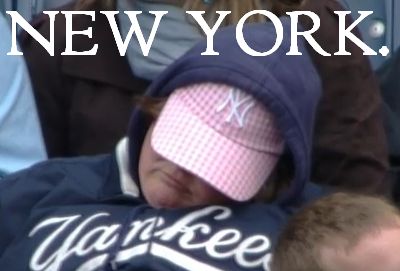