One year and one day ago from today, this game happened. You might remember it. The Rangers where battling the Red Sox for the lead in the AL Wild Card race. In perhaps the closest the Rangers had come to providing us a playoff-style atmosphere since the late 2004 comeback attempt, the Rangers faced off against those very same Red Sox in Arlington for a weekend three game series.

The Rangers had a 4-2 lead going into the 9th inning of the opener when Frank Francisco came undone. Six runs later and the Rangers would lose a heart-breaker to a hated AL East foe. Now, a year later, the only thing that seems to have changed is the Rangers have a commanding lead in their division and Frankie's implosions against the AL East at least leave the Rangers tied or ahead. Those old wounds are now emotional scars that flared up on us two nights ago.

The Rangers won that series against Boston, however. The last game being a thriller in which Frank Francisco pitched a scoreless inning with two strikeouts. And with that win, the Rangers moved into the lead in the Wild Card race. It was fun. It felt like the Rangers were nearing a conclusion to the NeverEnding Story that is rebuilding a baseball franchise. It wasn't to be, however. It looks now like it was just one year too early. But you have to think, for all of the doubters, of which there is justifiably plenty, when it is said that these Rangers have never been here before, it's not entirely true. They've been in mid-August battling the Red Sox for a playoff spot. They didn't succeed in the end last time. They didn't pull it off. But they were there. They know what it's like to try. This year is about one step forward and then the foot race.

The last time the Rangers faced the Red Sox they had Hunter, Lewis, Lee, and Wilson going in that order. They have pretty much the same rotation in the same order this time around except for the Cliff Lee part. Oh, and one other difference, instead of facing Beckett and Matsuzaka like they will in this series, the Rangers faced Tim Wakefield and someone named Felix Doubront, who I still am not sure is a real person, last time at Fenway. It's never easy, but hey, no Kevin Youkilis! So, if you hear booing it most likely is going to be booing that you are hearing and not Youking. I can't make any promises though. Also, Dustin Pedroia is out. That means since Ian Kinsler is out as well an entire broadcast's worth of material talking about how Pedroia and Kinsler were once teammates and have battled each other for AL second base supremacy ever since has to be scrapped. I'm pretty sure it will get worked in somehow anyway.

It's Friday the 13th which would be ominous if not for the fact that officially the entire Texas Rangers franchise was saved today. It's done. It's over. The Rangers have new ownership. I will selfishly tell you that the greatest part about the finality of it is the fact that it doesn't loom over the amazing ride this season has been any longer. Sure, I dig the stability and the promise of a new ownership group. But, seasons like this don't come along for a Texas Ranger fan very often and to be able to fully enjoy it now that the debacle of the ownership battle is complete, I am truly elated. But it is mellow elation. Greenberg/Ryan always seemed like the right group. And they won. It's perhaps the first time in franchise history that the Rangers won something important. Here's hoping it will only take a few months for them to win a second important thing. 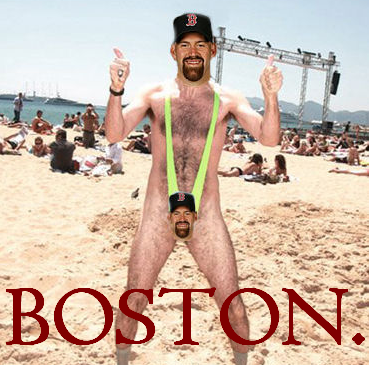