At some point I really want someone like Andres Blanco to hit a game winning grand slam against these Baltimore Orioles and holler, "I HAVE BECOME VENGEANCE!" as he watches the ball fly toward the B&O Warehouse in right field. Extra sweet bonus points would come when Neftali Feliz comes in and strikes out the side in the 9th. This would include K'ing the final batter, Corey Patterson, to secure the win. Afterward, I imagine, Ron Washington would take the whole team to Pizza Hut for a pizza party. Also, LSB will be awarded exclusivity in local online coverage of the Texas Rangers and thedirkatron would then be named Texas Rangers Beat Reporter.

These and other fantasies are how I've chosen to block out the bad memories of the last time these two teams played each other. But I guess I'm finally ready to admit that a series between these two teams was played just before the All-Star break. Not because I want to come to grips with this reality, but because I know over the rest of this week I'm going to be hearing a lot about it. Rather than face the weekend ignoring the signs and clues that something terrible happened back in those July nights, I am ready to embrace them solely because now the Rangers get an opportunity to avenge themselves and us. Namely us. Do what needs to be done, Texas Rangers.

Of course back then, we were still wondering if the Rangers would win the division, now it's all about when the Rangers will clinch and looking at the schedule to make guesses at the clinch date. So the joke is on you, Baltimore. You're nothing to us! Nothing!

Please don't beat us up.

So William Nathaniel "Buck" Showalter is running the show in Baltimore now, eh? Good luck with all that. Sure, he even has a nice 10-4 record going so far since he was named Mr. Manager. I'm sure the Orioles will even be pretty good next season. They certainly have the talent to be good. But how long is it going to be before Matt Wieters wants to deck Showalter in his beady-eyed face? I give it a year and a half tops.

Well, now that the three-headed monster portion of the AL East schedule is over with, the Rangers probably should just go ahead and win some of these games. There's really no need to get pushed around by also-rans. I mean, sure, there's the whole running out Josh Hamilton and the Oklahoma Redhawks every night for the next little while, but even Ramon Vazquez and Travis Metcalf had 11 RBI in a 30 run game that also featured Jason Botts and a waning Frank Catalanotto. You can do it, Andres Blanco!

I don't know what I would do if the Rangers got swept again against Baltimore. I don't know how I could seriously, and with a straight face, allow my Rangers World Series dreams to continue to be fantasies rather than delusions if within the same hopeful season there was also an eight game losing streak to the worst team in the American League. Also, not that pitching match-ups against the Orioles really matter much, because they are all pretty terrible this season, but the Rangers are missing the Orioles de facto "ace" Jeremy Guthrie who just finished getting beat by the Mariners yesterday. So, yeah, for sanity and keeping the dream alive, the Rangers should try to avoid getting swept by the Orioles again. In fact, how about a little turnabout is fair play? 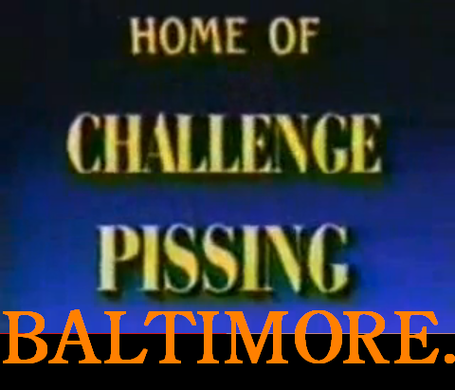