Hey Oakland, yeah, over here. So you want to win the AL West, right? You're looking for a nice post season series as a reward for your 162 games of hard work I'm sure. Well, allow me to tell you how you can achieve your goal. But first, I have to inform you that there's a team in Texas that is doing you 8.5 games better for that opportunity. But don't worry; I'll walk you through this. So, let's say the Rangers reach their predicted 92 wins--not just Nolan Ryan's predicted 92 wins but BP's PECOTA adjusted prediction, as well--that means you, the A's, with your current record of 63-63, will have to go 30-6 the rest of the way to outpace the Rangers with a 93-69 record. Sounds simple enough, right? However, let's say the Rangers are on pace at the moment to only win 90 games. Now, you're only looking at having to go 28-8 the rest of the way. That's even better! You're getting closer already. But we can go one further. Let's say, for a moment, that those Rangers hit a rough patch, and they finish their season playing only around .500 ball. They go 17-18 the rest of the way to end up with a record of 89-73. Now you only have to go 27-9 the rest of the way and that division is all yours!

You can thank me later.

In the meantime, let's look at some series outcomes, shall we? Here are the four possible scenarios that can come from this series:

If you're going to win the west, Oakland, you probably want to go with the first scenario. That would be my advice.

Of course, the A's might have the pitchers going to do just that. Sure, none of them are named Trevor Cahill, thankfully, but all of the A's starters in this series hold a particular advantage in that they are lefties and that's like Texas Ranger lineup kryptonite. In addition, worse than Cahill, the Rangers are getting their first look of the season at Brett Anderson. Brett Anderson is really, really good, y'all. He's 2.90 FIP with a .307 BABIP good. He's probably-going-to-win-some-Cy Young Awards-really-soon good. I hate that Trevor Cahill has made it a personal mission to be amazing against the Rangers while the A's also have Brett Anderson just being awesome at the front of the rotation. It makes me concerned about the future and that's not nice. However, both Cahill and Anderson look like fat baby-men. So now we can laugh through our tears over the next five years at the very least.

The Rangers, always the contrarians, have their all-righty brigade going. Isn't baseball funny? Colby Lewis will be pitching against the A's for what is like the 28th time this season. I'm not even trying to make a joke. Every time I turn around Colby Lewis is pitching a game against the A's. Luckily for him, this time, it isn't against Trevor "I hate you, Texas!" Cahill. However, he is facing off against Gio Gonzalez and Gio is no slouch himself. In fact, Gio Gonzalez is having a better year than Trevor Cahill.

Overall, I would favor the A's in the first game, though home field for the Rangers makes it closer than you might think, the second game is a crap-shoot considering no one knows which Rich Harden will show up other than a sexy one, and the third game likely favors the Rangers but not by much. All things considered, it is going to be very difficult for the A's to come in and sweep this series on the road which is likely the only play they can make to keep themselves even on the margins of the playoff race. 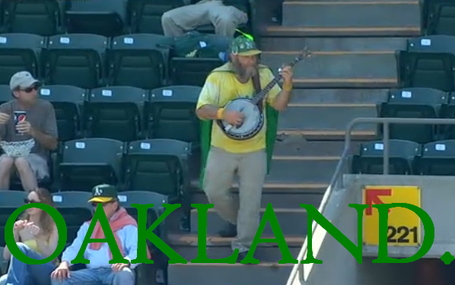