It's nice to get to watch the Rangers play a sub-.500 team again. It's almost quaint. The Baltimore series from a week or so ago doesn't count because they play in the AL East which means I'm pretty sure if they played in any division in the NL, they would be winning by 30 games right now. Plus, Baltimore clearly has made it their 2010 mission to cause the Texas Rangers misery.

The last time the Rangers played a sub-.500 team not named Baltimore was August 5th against Seattle. Before that, if you don't count Anaheim or Detroit, which weren't sub-.500 teams when the Rangers played them, you'd have to go all the way back to July 7th against Cleveland. That's the series that guy fell from the second deck and a dude elbowed a kid face-first into a fence on Greene's Hill. That feels like a lifetime ago. Cliff Lee wasn't even a Ranger yet. Vladimir Guerrero hadn't yet turned into a zombie. Chuck Greenberg was but a hope and a dream. It's been a long while. If before the Texas Rangers were the Cupcake Rangers, now they're the Dried-out Cornbread Rangers. The schedule has gotten harder to swallow.

So it's nice to get the play the Royals. They're not one of the better teams in the American League and that's become standard fare for the Rangers in the last month. That doesn't mean the Rangers are guaranteed to defeat the Royals with ease. But knowing going in that this series isn't exactly huge with many implications is a nice vacation from the last two months. With that said, and even though I still have no reason to believe the Rangers won't play a post season game this year, for the Rangers to continue to stay with the Twins in the race for home field in the ALDS, they need to win these few remaining games they have left with sub-.500 teams. After this series, the Rangers play 10 straight against MIN, TOR, and NYY. So, while it is nice to play a sub-.500 team, it's even better to beat them.

Harder hitting analysis: The Rangers get Nelson Cruz back for this series with Ian Kinsler soon to follow. That's good.

I have a hard time believing the Royals, even at home, should be favored in any of these match-ups. However, I would be surprised if the Rangers swept. It's just not easy to do. And yet, that's my expectations. The Royals three starters in this series have a combined season WAR of 1.8 (1.2 of that belonging to Kyle Davies). The Rangers three starters have a combined season WAR of 9.8 (Only .4 of that belongs to Tommy Hunter). And perhaps the best news of all is the fact that none of these Royals starters throw a baseball with their left hand. The Rangers should do themselves a favor and win these games. 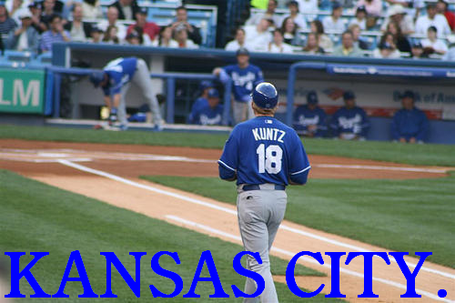