The last time the Rangers played the Mariners something really special and unique about this season happened. The Rangers were sold. Of course, they weren't sold in any gentlemen-shake-hands and put pen to paper way like how these things usually go. To do it the usual way would have been far too easy for our team. No, after months of headaches, despair, seemingly shady dealings, and almost no end in sight, the fate of every aspect of the future of the Texas Rangers, almost unbelievably, came down to an auction on August 4, 2010. There was Cuban/Crane on one side and Ryan/Greenberg on the other. And the Texas Rangers hard at work trying to even up a three game series after losing the first game of that series to the Mariners in Seattle. You know the results. Perhaps you would even say "the good guy" won. And, as a sign of great things to come, Rangers won that night as well.

Of course, one of the best moments about that night, and something I'll never forget, happened when the Rangers had just battled back from a 5-2 deficit to claim a 7-5 lead going into the 6th inning. Seattle scored a run in the bottom of the 6th to pull within 7-6 as they seemed to have at least calmed the sea of momentum. In the top of the 7th however, as it looked more and more like Cuban was just going to lay more and more cash on the table until the Texas Rangers were his, Michael Young hit a grand slam to left field to increase the lead to 11-6 and put the game out of reach. Almost timed to the moment, as that ball was sailing over the wall, back in Texas, Greenberg's group made a larger bid than practically anyone covering the auction believed they could go monetarily. It was clear, as the Face of the Franchise was delivering the death blow in Seattle; the Greenberg group were not going down without a fight.

As Eric Nadel was saying, "That ball is history!" little did we know how correct he was.

The 2010 season has 17 more days. The Rangers play 17 more games. There are no more off days between now and the final scheduled game of the season. The next time the Rangers have an off day, it will be before Game One of the ALDS. The Rangers are heading on a 10 day west coast road trip. When they return home, with almost no doubt, they will be the American League West Champions.

The Rangers will be facing what is essentially the Mariners playoff rotation. You know, if they weren't going to be losing 100 games and score perhaps 500 runs. King Felix, Vargas, and Fister are likely the Mariners #1-#3 and have been throughout the season. The Rangers counter with a couple of their best in C.J. and Cliff Lee (making his first start against the Mariners since he was traded from Seattle) and Tommy Hunter whom might be the Rangers #4 starter. The starting pitching probably marginally favors the Mariners. In game one, Hernandez, likely the best starter in the American League, still only barely represents an advantage over C.J. Wilson. As good as Felix has been this season, the team he's pitched the worst against is by far the Rangers. He's given up 17 runs in 24 innings to the Rangers while going 0-3 against them this season. The closest any team has come to scoring off of Felix at that clip is the Angels with 15 runs in 32.2 innings. Cliff Lee represents a pretty large advantage in game two and game three is probably a push from the starting pitching match-up perspective.

Right now, it's all about getting healthy, getting into mid-season form, and lowering the Magic Number. The Rangers should be able to do that against these Mariners. 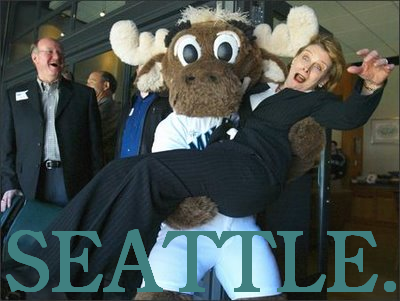