The hardest part about waiting for the inevitable is the formality of it all. The Rangers lost a three game series against the Mariners but ultimately gained ground simply by winning one of those games to chop another digit off of the Magic Number. Otherwise, those games, and these games in Anaheim, are meaningless. Once the Rangers officially secure the division, there isn't anything left to play for. In fact, the only thing left on the docket once the Rangers have an x by their name signifying they've clinched a spot in baseball's postseason, is making sure the team is healthy when they get there. Even with the news that Joe Mauer is injured; the Rangers won't catch the Twins for a home playoff start. The Rangers certainly won't catch the Yankees or Rays of best record in the American League. The Rangers won't even be playing for a franchise record in wins and they probably wouldn't have that as a goal even if they had a more realistic chance to.

However, I think beyond waiting for that Magic Number to reach zero, and beyond getting Josh Hamilton back in the lineup and Frank Francisco in the bullpen, the Rangers have one more thing left that can positively impact their season. For the sake of hope against three teams better than they are when games matter again in October, I hope the Rangers treat these remaining games as tune-ups, not give-ups. I'm not sure how much momentum even matters but as a fan, it sure would make things feel more possible if the Rangers went into postseason play having played well before going to Yankee Stadium or Tropicana Field.

Unless the Rangers sweep the Angels and the White Sox sweep the A's, this won't be the series in which we watch the Rangers clinch the AL West title. However, with a series win, we will get to see the Rangers eliminate the Angels at their place. That's something to play for.

For the second consecutive series, the Rangers face an AL West's opponent's #1-#3 in its rotation. While you could argue Joel Pineiro is better than Ervin Santana, it's really close, and Santana hasn't been recently reinstated from an injury. I'd say Santana is the Angel's number three right now but that just means the Angels have a pretty good number four as well. The Rangers counter with their number five, three, and two. The Rangers starters in this series may all very well start a playoff game (the odds of Holland doing so are pretty slim and may depend on his success of lack thereof in this series). However none of them is named Cliff Lee and with the Rangers playing this series on the road, the Rangers are in a similar situation to the one they were in at Seattle. The match-ups favor the home team. That doesn't mean the Rangers won't come out ahead in this series, it just means the Angels are set up to have their best possible chance at success and the Rangers are not. 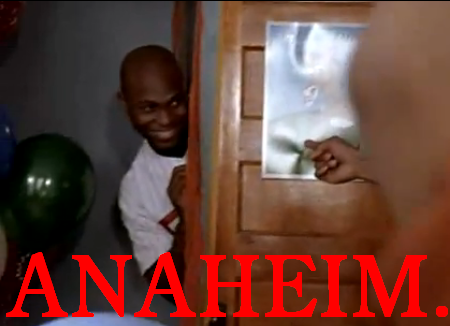 Yet again, for no reason: