So here it is. The Rangers are playing the second place team in the AL West this weekend with an 8 game lead with 11 games remaining. This equates to a Magic Number of 4. With any Rangers win accompanied by an A's loss, the Rangers subtract two from that Magic Number. When the Magic Number reaches zero, officially, without a doubt, with an x by their name denoting a playoff berth, with no three game losing streak signaling wide spread panic--because, hey, the 2007 Mets thought they were going to the playoff, didn't they?--the Rangers will finally clinch the AL West division championship.

To become division champions, per that guideline, the Rangers need to win two of these four games in Oakland. If they win two games in Oakland you will bust out the wallet, pry that cowering credit card loose from within for one more round of abuse. What's debt matter now? You will buy as much Rangers AL West Champs gear as you can find. You will pop that champagne you bought and saved along with Nelson Cruz, Clay Rapada and Jackie Moore. Maybe you'll have a Zima for Josh Hamilton. As the Rangers flood the field, heck, you might even shed a tear.

Maybe it seems silly to the New Yorks and Minnesotas and Philadelphias of the baseball world that this means so much to us. But we're different. We're not the Yankees or the Twins. We're the Texas Rangers. Playoffs don't happen for us. The Washington/Texas franchise has averaged a postseason appearance once every 16 years. Therefore, we cherish it. It is a culmination of years of indifference at best and sorrow at worst. Celebrate it when it happens, Rangers fans, because it might just be 16 more years before we see it again.

Michael Young will probably still be a Ranger then. He'll be a hitting coach or the new Jim Sundberg or maybe he'll even be the manager, but he'll be around. And when the Rangers are counting down a Magic Number for a special season in 2026, he'll think back to the final out of the game that clinched the 2010 AL West Division Championship just like you and me.

Since I'm getting ready for a Geography quiz and then going to the game, I will keep this brief:

The Rangers will come home to Arlington as AL West Champions. If they don't, blame Robbie. 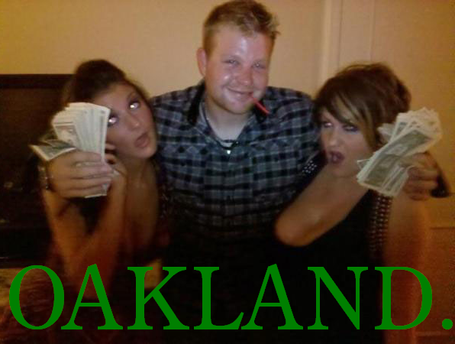