Little did we know that an early September series in Minnesota would be the biggest of the season. Somehow, however, it is. We've talked a lot about it. The Rangers are locked in a battle with the Twins for the second best record amongst division winners which will grant the team that finishes with the better record home field advantage in the first round of the post season. This series is huge for the Rangers chances of opening October at home and avoiding the AL East winner at their place. Currently the Rangers trail the Twins by 1.5 games but only one game back in the loss column. You probably know the scenarios but I will group them into two:

It's possible that the Rangers could come back and overtake the Twins with a better record if they lose this series and are 2.5 games back with about 25 left to play. It isn't likely in the slightest, however. Basically, the Rangers need to win this series to have a realistic shot. If the Twins sweep this series, like they did in May, well, I guess you'd better start figuring out which is more appealing to you: The Yankees or watching Rangers playoff games from Tropicana Field.

So, while the headlines and weekend series previews might be written about how this series is a battle between division leaders and could be a possible playoff preview, and sure, that's factually correct, the real story is the fact that these teams are locked in a struggle for a prize that isn't exactly baseball-headline tangible. It's interesting to me (and likely no one else) how abstract this challenge is for the Rangers. It's not a down the stretch all-out battle for the division title. It's not a cross-division melee for that final berth via the Wild Card. Instead, it's just a couple of teams trying to get into the post season with a better record than the other. This isn't about being a playoff preview, but it should be played with playoff intensity. For the first time in a long time this season, the Rangers have something to lose.

Good news: The Rangers actually have a decent chance to win this series. While the Twins are a very good team, and are playing at home, which puts the Rangers at a disadvantage immediately, there are some unique circumstances that might slant the playing field in the Rangers favor. Thanks to the Detroit Tigers bumbling chance after chance to put a game away against the Twins last night for 13 innings, before finally winning it, the Twins had to use eight pitchers, including two whom were supposed to start games in this series. There's an excellent chance that the Twins bullpen will be in disarray for at least the first game of this series and probably more. Sure, thanks to September roster expansion, the Twins can call up reinforcements, but wouldn't you rather face an Anthony Slama in a late-inning situation than a Jesse Crain?

The Twins will be calling up Triple A starter Matt Fox to make his Major League debut in game one instead of previously scheduled Nick Blackburn who was the losing pitcher in the 13th inning of last night's game. Fox is a right-hander with a 4.60 FIP in 123 innings at Rochester. Game two will be a rematch of a game from about 10 days ago between Colby Lewis and Carl Pavano. The Rangers won that game 4-3. Game three currently has C.J. Wilson, who might be the best pitcher in the American League over the last two months, scheduled to face Blackburn. The Rangers will have their chances with these match-ups. They need to capitalize because they probably won't see a pitching probables perfect storm like this again this season. The fact that it comes in the biggest series of the year to date is all the more fortuitous. But the Rangers still have to win the games. 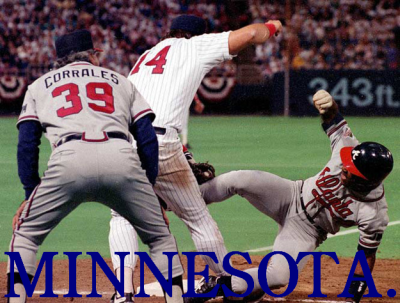