It's almost appropriate that the end of the regular season is against the Los Anaheim Angels. While the Rangers "battled" the A's for most of the last stretch of the season to finally wrestle that A.L. West title away from the other three teams in the division, it is the Angels with whom many expected to see the Rangers challenging. It is the Angels, now in second place, that many expected to be where the Rangers are today. It is the Angels who were the defending champs. If nothing else, before the season began, most people suspected the Rangers would be in pretty good shape if they still had a chance as this series rolled around. Instead, the Rangers have already taken their chance and have a division title to show for it. All that is left is the tamp the dirt down on the 2010 Angels' grave.

And, quite honestly, who wouldn't want to rub it in a little on these Angels? The Rangers get to shore up their playoff rotation and rest their starters while the Angels get to think about their failed year and the end of their reign at the top of the A.L. West. There's just something extra satisfying about playing the final 2010 scheduled games at the Ballpark against a neutered Angels team. While the Rangers players are trying to figure out which East Coast city they'll be flying toward to battle in the American League Playoffs, the Angels players will be making golf plans. While the Rangers front office ponders keeping Mark Lowe or Clay Rapada on the postseason roster, the Angels front office ponders where they went wrong and begin to make off season plans.

Sure, the Angels will be playing in October like many thought they would. Only it will be one final series to look over at the guys across the diamond and see what could have been if they were as good as the 2010 Texas Rangers. 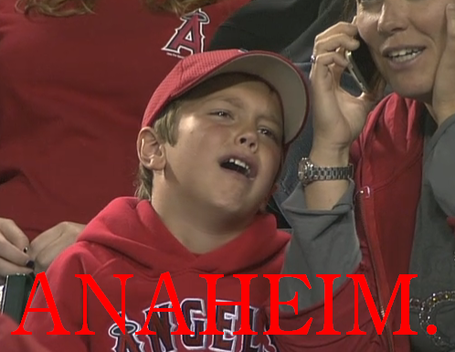 For reasons I can't explain: