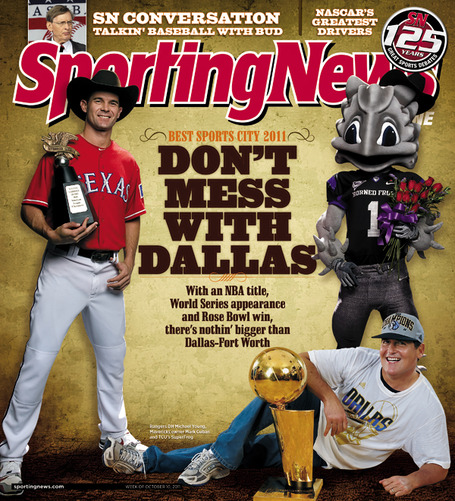 From the accompanying press release:

Dallas/Fort Worth, with the NBA champion Mavericks, AL champion Rangers,

undefeated Rose Bowl champion Horned Frogs and the home of Super Bowl XLV, is No. 1 in

"The Metroplex is a sports fan’s dream — great pro sports, college powerhouses and some of the

hospitality," said Fort Worth Mayor Betsy Price. "When it comes to big-time sports, we’ve got

that the 'Titletown, USA' claim pretty much belongs to Fort Worth, Dallas and the North Texas

"Of course the topper was winning the trophy this season. It was right out of Hollywood casting. A

band of old rejects comes together to beat the self-proclaimed Dream Team of the NBA. Along

the way we sweep the Lakers and beat the Thunder. No one saw it coming, which made it all the

"From the time I got here to where it’s at now is night and day," said Texas Rangers DH Michael

Young, who made his debut with the Rangers in late 2000 and hasn’t played elsewhere. "Our

fans are really passionate about our teams. It was just a matter of our fans hopping on board with

our baseball team. We had to make sure we gave them a reason to do it."