As the 2011 Texas Rangers regular season progressed, one of the story lines that was a common point of discussion was the difference in results for Derek Holland when Mike Napoli was his catcher instead of Yorvit Torrealba.  From the table below you can see significant differences in ERA, OPS, BABIP, BB/9 and HR/9

The difficult part is attributing the "why" to those results.  How much of that is an actual difference in Napoli versus Torrealba and how much of that is just Napoli being fortunate to catch Holland more often on the days he was "Good Holland" combined with some BABIP luck?  One data point we can review to see a difference between the two catchers is pitch selection.

In Napoli's starts Holland threw more fastballs, twice as many curveballs and only a fourth of as many change ups.  Using Fangraph's pitch type values they have his fastball his only above average pitch at 0.30 runs above average per 100 pitches (RAA/C) but show his change up as easily his worst pitch at -1.53 RAA/C.

The data pulled from PitchFX in the table below supports those values by showing that Holland's change up was put in play far more often than his other pitches and that when put in play the slugging percentage for balls put in play (SLG In Play) was higher than all of his other pitches.  In short, opposing batters were able to hit his change up often and hard.  His curveball wasn't a particularly strong pitch, but batters rarely swung at the pitch allowing for the highest percentage of called strikes and a better pitch to change the batter's perspective than his easy to hit change up.

When you break down the pitch data by catcher you see that Holland's fastball was thrown for strikes more often when Napoli was the catcher by a small margin, but the SLG in Play was dramatically lower at .384 compared to .500 when Torrealba caught.  This suggests that Holland's fastball command was better both in throwing strikes and importantly, throwing quality strikes.  Now... how much you can actually attribute Holland's better command of his fastball to Napoli's presence falls into that "hard to know" category.  It's possible that the way Napoli calls a game may make Derek more comfortable and it's also possible that Napoli was lucky to get Holland on days his head was right.

So now that we've looked at the aggregate data for both Holland's season and then split by catcher it's important to look at Holland on a game by game basis as well.  The chart below shows the pitch selection by game, the game score below the date and shaded to indicate who was catching on that day. 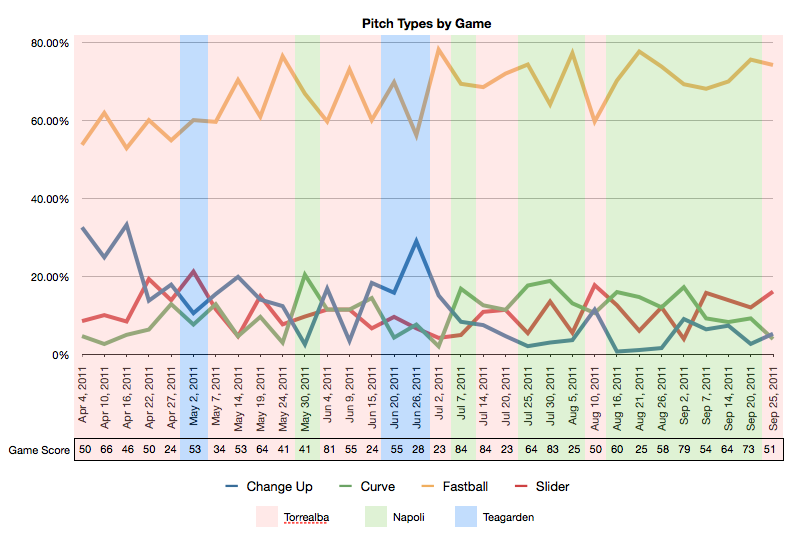 When you look at the individual game scores you can see that Holland had some of best games with Torrealba as his catcher and some of worst games with Napoli as his catcher.  Ultimately a pitcher must execute and is the person most responsible for what pitches he throws and how well he throws them.  There is no magical advantage that Holland will always pitch well with Napoli or poorly with Torrealba.  Also, to caveat an earlier point about Holland's fastball being his best pitch, the games he threw it close to 80% of the time were some of his worst games.  Days when he didn't have command and had to throw more fastballs because he was behind in the count and tried to force strikes.

However... I do think that a catcher does have some impact, especially for a young pitcher who hasn't established who they are on the mound at the major league level.  I believe that Napoli helped Holland be "Good Holland" more often by playing to his strengths in calling his best pitch more and almost never calling his worst pitch.  I also think it's possible that Derek simply communicated better and felt more comfortable with Napoli behind the plate.  And while it is ultimately up to the pitcher to execute, I think it is possible that Napoli helped create the best environment to achieve success.