The Achilles Heel of C.J. Wilson

Share All sharing options for: The Achilles Heel of C.J. Wilson

There is no mystery as to what element of C.J. Wilson's game he struggles with the most; his #throwstrikes hash tag reminds us before almost every start that he's thinking about it.  C.J. Wilson walks a LOT of guys.  In 2010, his first year as a starter he led the American League in walks and was 93rd out of 94 qualifying starters in the Major Leagues walking 10.9% of every batter he faced.  That's the sort of walk rate you're more likely to see from a reliever instead of a 200 innings pitched starter.

Since 1981, the average walk rate for qualified starters is 7.6% and with just over 75% of the qualifying seasons having a walk rate under 9%.  The breakdown below has each qualifying season over that time broken out into tiers by walk rate.  In addition to their being far fewer seasons where a pitcher is able to pitch a full season as a starter with a high walk rate, you can see the average performance drop off as the walk rate increases with each tier.

This doesn't mean it's impossible to have a good year with a high walk rate.  In an extreme example, Nolan Ryan did alright with his career 12.4% walk rate.  A more relevant example is that despite having such a high walk rate, C.J. had a very good year in 2010, but it is obviously more difficult to be successful if you're walking a high number of batters; C.J.'s 2011 post season provides another extreme example with a 14.6% walk rate to go with his 5.79 ERA and 6.31 FIP.

C.J., being well aware of the dangers of being a high walk pitcher, did something pretty cool in 2011, he managed to walk only 8.1% of batters. That's a massive 24% reduction from his career walk rate of 10.6% coming into last season.  With all the other things that C.J. does very well: striking guys out, getting ground balls and limiting home runs, his very good 2010 turned into an excellent 2011 where he posted career bests in pretty much everything and finished 6th in AL Cy Young voting.

However... now that C.J. is a 31 year old free agent and an 8 to 9 figure decision looms for the Rangers, the question is one of sustainability.

Hat tip to BBTiA's Prashanth Francis A.K.A. GhettoBear04 who made a comment recently expressing concern on C.J.'s ability to maintain this marked improvement in his walk rate.  The comment piqued my curiosity to find other examples of starters who magically cut their walk rate at such a high magnitude.

Using starters who began their career after 1981 and pitched a qualifying season as a starter, this gave me a pool of 396 different pitchers.  I targeted guys like C.J. (high walk starters) by focusing on those with a career walk rate of 9% or more after accumulating at least 400 innings pitched, taking my pool down to 150 high walk starters.  I was somewhat surprised to find that 71 of the 150 high walk starters had a season where they posted a 20% or better improvement in their career walk rate similar to C.J.'s 24% improvement.  But in thinking about it, being a successful starter with such a high walk rate is very difficult and something that every one of those pitchers work on with almost half able to achieve a breakout year.  I reduced the 71 pitchers with a breakout performance even further by removing a few active pitchers like C.J. who hadn't had an opportunity to pitch at least four years since their massive reduction year, taking the total down to 61.

This group of 61 high walk starters all had some sort of light turn on in a magical season to reduce their walks so significantly, but in their following seasons the average regression to their career numbers was actually pretty moderate.  The chart below shows the average performance of those 61 starters and then projects what C.J's future walk rates might look like if he followed a similar curve with T0 representing the breakout year. 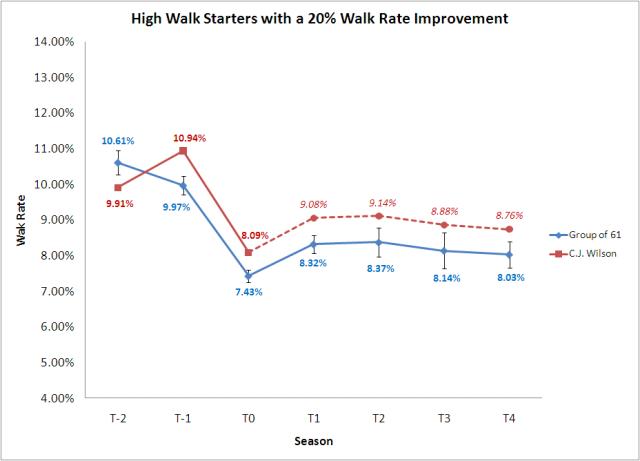 I was surprised to see the relative stability of the walk rate at a new level starting the next season.  Though every pitcher is different and some regressed much more significantly, some also actually improved and continued improving as you'd expect.  The group of 61 does shrink some what as the years progress with some pitchers' careers ending either due to injury or ineffectiveness prior to completing all four years.  The error bars indicates the variance using the standard error as each season after T0 became more variable, and an important note is the fourth season (T4) "seems" to stabilize but is more a product of the most variable pitchers who were unable to even pitch a full four years after their breakout not being included in the final 45.  The table below shows more interesting information about each season.

Based on the performance of these other high walk starters with breakout seasons I think it's reasonable to expect C.J. to regress toward his career walk rate, but also reasonable to expect it won't be a massive regression.  I also think it's likely that 2011 was a career year for C.J., unlikely to be repeated in it's total excellence.  As stated before, every pitcher is different and C.J. has a great work ethic, so it is possible will improve or even maintain a walk rate close to his 2011, but if you acknowledge that you have to acknowledge that it's also possible that he will have a much more significant regression and walk people similar to his 2010 numbers.

Personally, I'm expecting something close to the graphed values where it gets a bit worse but is something that C.J. constantly works on to keep from being an issue and that his walk rate and aging make him look more like the #2 type of pitcher he was in 2010 than the #1 he looked like in 2011 (which is still a very good pitcher).