By ghostofErikThompson@apoplecticfittz Nov 8, 2011, 8:02am CST

It turns out the perpetrator of the clubhouse speech audio leak was a Ranger employee after all.

Anthony Andro writes that the employee has been outed and dealt with. The Rangers now consider the matter closed. Though, I have to imagine that whoever decided it was a good idea to record Ron Washington's speech and share it with friends in St. Louis ultimately met with this face: 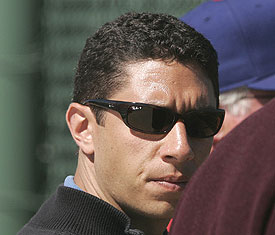 Richard Durrett continues his series of offseason questions facing the Rangers by asking: How do the Rangers split up catching duties in 2011?

The DMN's Ryan Jones is beginning a series where he will ask ten key questions facing the Rangers this winter. Today: Who's the future at first base?

Finally, MLB.com picked awards for each of the 30 teams in the following categories: Pitcher, Perfomer and Breakout Player. The Rangers winners were C.J. Wilson, Michael Young, and Derek Holland.