When last we left the 2011 Texas Rangers Timeline, the team was coming off an 16-12 August and were staring down the season's final month. The goal of September was to ward off the Anaheim Angels once and for all and win a second consecutive American League West championship.

The Rangers began September with a 3 1/2 game lead in the A.L. West and had traversed one of the more treacherous stretches of the season without relinquishing the division lead enough once.

The final game of August evened a series against the Tampa Bay Rays in what was -- so it seemed at the time -- the only scheduled series the Rays would play in Arlington in 2011:

In the rubber match, C.J. Wilson was a fingertip away from potential perfection. After tossing five perfect innings, in the top of the 6th, Wilson took a stab with his bare hand at a shot headed up the middle on a 3-2 pitch to Casey Kotchman. The ball redirected off of Wilson's finger and went for a single which ended the perfect game bid.

After allowing his first baserunner, Wilson lost command of his pitches and would exit after getting in trouble in the next inning. Coming into the inning, Wilson had struck out seven Rays and said after the game that he would always regret that 3-2 pitch to Kotchman because he felt he had a chance to do something special.

The Rangers acquired Mike Gonzalez to be a lefty specialist and further shore up the bullpen at the August 31st waiver trade deadline. Gonzalez made his Rangers' debut in this massacre of Boston.

I don't know if you remember the bottom of the 4th inning in this game, but it's probably best if you don't. I recall after this game we had all but decided that Colby Lewis could not be trusted against teams with quality offenses.

Adrian Beltre returned from injury as September began after missing nearly six weeks of the season. On this day, he collected the 2,000th hit of his career. I missed you, Adrian Beltre.

After this complete game four-hitter, James Shields had allowed eight total hits and only one run while striking out 13 Rangers in his 17 innings of work against Texas in 2011. Besides maybe Brett Cecil (and whatever magic spell Trevor Cahill held), no pitcher was able to handle the Rangers better in the regular season than Shields.

And LSB was there!

Even though Trevor Cahill did his best to ruin our day, it was time for WedgeFest, baby! Not even one of the most frustrating losses of the season could keep us down! 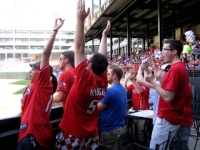 In one of the more important games of the season, with the division lead perilously at its lowest point since August 10th, C.J. Wilson pitched like an ace and Adrian Beltre hit career home runs number 299 and 300. 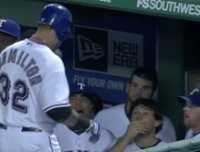 Catch that one, Shelley Duncan.

Alexi Ogando, who had already thrown more than 100 innings over his total from 2010, won his first game in exactly a month.

BLAKE BEAVAN in: The Revenge of the Cliff Lee Trade

The Rangers spotted Anthony Vasquez (perhaps the worst starting pitcher in the American League in 2011) a 4-1 lead before deciding to play home run derby with three solo home runs in a span of four batters to knock Vasquez out of the game. I recall being sad to see Vasquez go. 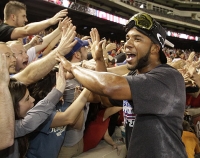 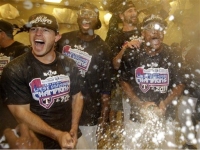 The Rangers rolled out the B Team the day after clinching the American League West title. It didn't matter. Michael Young and company nearly killed Felix Hernandez as LSB Tailgate III looked on and we listened to the FOX Saturday Baseball return of Josh Lewin. 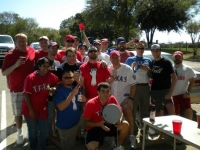 Even with the Rangers locking down the American League West championship days before, the 2011 regular season finale still had a lot at stake. With the Detroit Tigers sitting in the clubhouse at 95-67, and holding the tie-breaker, the Rangers had to win their final game to clinch ALDS home-field for the first time in franchise history. With a win, the Rangers would avoid traveling to New York to defend their American League Pennant for at least one round.

Also on the line was a chance for the Rangers to secure their best record in franchise history. A final win would top the 1977 Texas Rangers by a game. The Rangers would also move to 30 games above .500 for the first time on the season with a win and would end the season 10 games up on rival Anaheim.

In a tense game that gave us a glimpse of things to come, the Rangers and Angels were tied 1-1 going into the 9th inning when former Angel Mike Napoli extracted his final measure of revenge by hitting his second home run of the game -- and fourth of the series -- accounting for all of the Rangers runs and sent the best regular season Rangers team we've ever seen home to face the Tampa Bay Rays.

That's right. The Tampa Bay Rays came back from 9 games back of the Boston Red Sox in September and captured the Wild Card on the final day of the season in one of the wildest days of baseball in memory. The Rangers finished 19-6 in the month of September. The trek to return to the World Series, not unlike the trek to reach the World Series in 2010, would begin against the "Team of Destiny" Rays.