The Rangers began September with a 3 1/2 game lead in the A.L. West and survived a mid-month scare from the Angels as they whittled the division lead down to 1 1/2 games on September 10. From that date on, however, the Rangers only lost two more games until season's end and finished off Anaheim on the 23rd of September.

The Rangers won their second consecutive American League West title and finished one game back of the New York Yankees for best record in the American League. Even though a team in each league qualified for the playoffs thanks to hot finishes combined with epic collapses, the Rangers were arguably baseball's hottest team coming into postseason play.

The Rangers' ALDS opponent would be the Tampa Bay Rays once again. The Rays were nine games back of the heralded Boston Red Sox as late as September 3. In baseball history, no team had qualified for the playoffs after trailing by nine games or more with less than a month remaining in the season. However, the Red Sox went 7-20 in September, including six losses in seven games against the Rays, and were tied with the Rays for the Wild Card by September 26.

As the Rays tied the Yankees, Jonathan Papelbon was blowing the game in Baltimore. All with two out, the Orioles got a double from Chris Davis, a double from Nolan Reimold to tie the game, and then a game-winning single from Robert Andino. Boston was done. In Tampa, in the 12th inning, to cap off one of the most amazing days in baseball history, Evan Longoria snuck a pitch over the short left field fence and propelled the Rays to a rematch of the 2010 ALDS against the Rangers.

In 2011, C.J. Wilson dominated the Tampa Bay Rays (17 IP, 7H, 2 ER, 14 K). The Rangers were opening the ALDS at home for the first time in franchise history. The Rangers hadn't lost a game by more than a run in half a month.

In 2011, James Shields dominated the Texas Rangers (17 IP, 8 H, 1 ER, 13 K). Shields hadn't lost a game in half a month. The Rangers hadn't scored a run in the postseason going into the bottom of the 4th inning. But then the NAP-O-LI! NAP-O-LI! NAP-O-LI! chant was born. Baseball is weird.

The Year of the Napoli!

In many ways, this series reminded me of the 1996 ALDS between the Rangers and Yankees. The Rangers won the first game of that series easily on the road and were leading in the second game at Yankees Stadium before losing late. Then, in the first home playoff game in Arlington, Texas history, the Rangers got a standout performance from starter Darren Oliver before he ran out of gas and the bullpen blew the lead. In game four, the Rangers threw the kitchen sink at the Yankees but they were just too powerful.

I imagine we'll see the Rays in October a lot over the next several years. I wouldn't mind it if the Rangers were the Yankees to their late '90s Texas Rangers.

The Detroit Tigers beat the New York Yankees three games to two in the other Division Series. For the Rangers to return to the World Series, they would have to defeat the Comerica Curse and a Tigers team that went 6-3 against Texas in the regular season, went 20-6 in September, and had just beaten the team with the best record in the league. The Rangers lost four of those six games against the Tigers in one-run contests that were decided late in the game by the bullpen. Clearly, the revamped bullpen that the Rangers had put together in the second half of the season would need to come up big in this series.

All three of the Rangers wins against the Tigers in the regular season were won by Alexi Ogando. Ogando won each of those games as a starting pitcher for the Rangers. In the postseason, however, Ogando was being used as a late-innings reliever due to fatigue over the second half of the season and a pitching arsenal better suited for the bullpen. Many predicted that Ogando would be something of an X-factor for the Rangers in the ALCS given his success against the Tigers during the season.

Mike Gonzalez was the Willow of the bullpen! 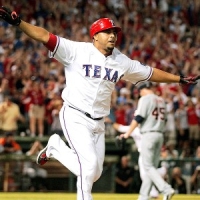 Happy Birthday to me!

The Curse of Comerica Continued.

Nelson Cruz doesn't believe in curses! At this point in the series, Cruz had hit a home run off of Justin Verlander which was ultimately the game winning run, hit the tying solo shot in the 7th inning of Game 2 before making baseball history by hitting the first walk-off grand slam in postseason play, and in Game 4, Cruz threw out Miguel Cabrera in the 8th inning of a tied game. Then, just to show off, Cruz hit a three run home run in the 11th to put the Rangers first road playoff win in Detroit to bed.

The Rangers did what they needed to do. They won once in Detroit to give themselves two chances to beat the Tigers at home to win the series. Of course, the Rangers could finish off the Tigers in Detroit if they could beat Justin Verlander for a second time.

Even though the Rangers shockingly won a game in Detroit to set themselves up favorably for the rest of the series, they were facing Justin Verlander at Comerica in Game 5. Verlander had been wholly mediocre in the postseason in his first three starts, including a Game 1 loss to the Rangers. But, with the Rangers history at Comerica on his side, odds were in favor of Verlander sending the series back to Arlington.

The Rangers had Verlander on the ropes in a 2-2 game in the top of the 6th when Ian Kinsler hit into a bases loaded double play to keep the game tied. In the bottom of the inning, the Tigers got an even bigger break when a ground ball to third hit by Miguel Cabrera -- destined to be a double play for the Rangers -- bounced off of the front corner of the bag and ended up in the left field corner for a go-ahead run scoring double. After that, the wheels came off and the story became how Verlander had propelled the Tigers back into the series.

Texas returns to the World Series! The Rangers were down 2-0, and facing a potential Game 7 against Doug Fister, when in the bottom of the 3rd inning, they made magic happen:

Alexi Ogando won his second game of the series and finished with 7 2/3 innings, 3 H, 1 R, 1 HR, 2 BB, 10 K in the ALCS. Ogando was spectacular in his role as bridge from Rangers starter to Mike Adams/Neftali Feliz in every game the Rangers won in the series. In many series, he might have been the MVP. However...

The St. Louis Cardinals stunned the Philadelphia Phillies in the NLDS three games to two and then beat their division rival Milwaukee Brewers in the NLCS four games to two to qualify for the 18th World Series in franchise history. Coming into the playoffs, the Cardinals were as much of a "Cinderella story" as the Tampa Bay Rays. However, the Rays seemed to be the more heavily reported story and the team most proclaimed as the "Team of Destiny."

With the Cardinals facing a Phillies team with the best record in baseball and the "Four Aces," St. Louis was considered something of an afterthought regardless of their equally amazing run to qualify for the playoffs. Everyone was wrong about which team to call the Team of Destiny. Cinderella didn't reside in Tampa Bay.

The Rangers went into the 9th inning of Game 2 of the World Series having scored their only runs off of a Mike Napoli two run home run in Game 1. National League baseball still sucks.

With the Rangers three outs away from trailing the Cardinals 2-0 in the World Series the Cardinals went to closer Jason Motte. Motte had only given up one baserunner in the entire postseason when Ian Kinsler lead off the 9th with a single. Kinsler dared to challenge the elite arm of Cardinal catcher Yadier Molina and stole second. With the bunt off, Elvis Andrus singled to center and then advanced to second on a poor throw from center fielder Jon Jay that glanced off of Albert Pujols' glove.

Two sac flies from Josh Hamilton and Michael Young later, and the Rangers had pulled off a 9th inning comeback win to draw the World Series even at one game apiece. And that was cool. But hey, look at this thing that Elvis Andrus did:

No matter what, we'll always have Derek Holland's Game 4.

No, the Rangers didn't actually win the World Series. And yes, it still hurts. But the Rangers did play in one of the best World Series ever. Because our team didn't win it is possible, and even probable, that we, as Rangers fans, will never truly be able to enjoy the gravitas of that fact.

That's not to take anything away from Minnesota, Florida, or St. Louis. They won. They will forever be the champions. But, eventually, when a World Series becomes an classic, it transcends who ultimately won. When a World Series transforms into a defining memory, it becomes an immortal battle in the minds of baseball fans forever. It's a shame they only play seven.

Perhaps someday that final score can be revealed without heartache and we can enjoy the fact that the Rangers played in a true Fall Classic. Perhaps it won't be possible until the Rangers do finally get that final strike in October. But someday, in addition to remembering the good times from a great baseball team, perhaps we'll remember the World Series for what it was: A special baseball moment in time.

For a Rangers franchise that has had so few special moments, we have now witnessed two consecutive American League Pennants and have seen the Texas Rangers lead in a excellent World Series. Even 14 months ago, that would have seemed preposterous. And yet, here we are. The 2011 Texas Rangers will mean more to us than a couple of games in a filthy National League city.

I still do think about those final games in St. Louis, probably every hour. It's not pleasant. But that's not what this is all about. Back before the postseason began, Adam wrote a post imploring us to Enjoy Every Sandwich. And that's what this exercise in remembering the 2011 Texas Rangers has been about. These Rangers didn't win 'em all. These Rangers didn't win it all. But these Rangers were the best team in the history of this franchise and it was delicious.

This was the best sandwich we've ever had and, ultimately, everything about it was enjoyable even though they got a few crumbs in the bed there at the end. We're still brushing them off but, before we know it, we'll be hungry again. 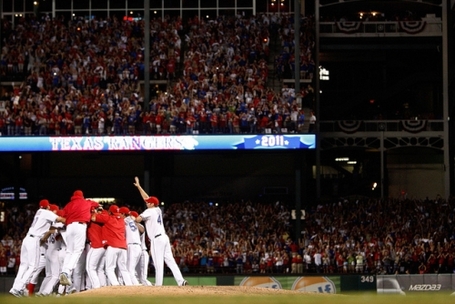