When last we left the 2011 Texas Rangers Timeline, the Rangers had just finished off a four game sweep of the Oakland Athletics and were heading into the All-Star break on a seven game win streak.

The sweep of the A's was notable for several reasons. With the series win, the Rangers buried the hopes of the team most figured would challenge the Rangers in the division in 2011. The A's began the early-July series eight games out of first with a slim chance of remaining in the race if they could make up ground on the Rangers in this series. However, in the aftermath, the A's found themselves heading into the season's second half trailing by 12 games and facing a couple of months of just playing out the string.

Additionally, the Rangers were able to win the make-up game that was rescheduled for this series from the original game that umpire Gerry Davis canceled because he was sick of Texas or something. Sadly, however, during that game, Rangers fan Shannon Stone lost his life when he fell out of the stands in left field while attempting to catch a ball from Josh Hamilton for his 6-year-old son.

A day later, the Rangers won one of the more dramatic games of the season when a still grief-stricken Josh Hamilton hit a two-out walk off two run home run off of A's closer Andrew Bailey. And that took us into the final game of the first half:

The Rangers ended the first half of this 2011 season by conquering a beast once thought to be immune to earned runs ‘round these parts. The Rangers, thanks to the mighty Adrian Beltre, had finally defeated Trevor Cahill.

What follows is a recollection of the remaining games in July for the 2011 Texas Rangers.

The Rangers began the second half in much the same fashion as they ended the first half; they shut out a bad divisional opponent. This marked Derek Holland's second consecutive shutout. Also, this:

THE RANGERS WILL NEVER ALLOW A RUN EVER AGAIN! 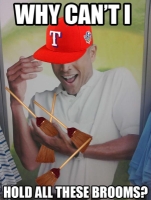 The Rangers won their 12th straight game, the second longest in franchise history. The streak furthered a theme of the 2011 Rangers attempting to out-do the 2010 Rangers who had an 11 game win streak. The five game lead in the West was the Rangers' largest of the season up to this point.

And a resolve-displaying warning shot was fired into the Orange County night...

C.J. Wilson out-dueled Jered Weaver but the Rangers lost because Endy Chavez forgot how to catch a baseball. This was not one of Endy's more impressive trolling attempts. 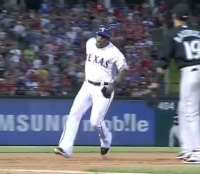 The Rangers got their long awaited revenge on Corey Patterson when Michael Young lined the game-winner in the 9th over his head. 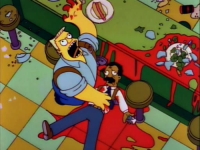 Oh goodness no. I'm pretty sure at this point I was writing, "I miss Beltre." for every comment.

This was Derek Holland's then American League leading fourth complete game shutout and his third in July alone. Also known as the "Ripped a new one" game as Ron Washington, instead of Mike Maddux, went to the mound in the second inning, when Holland got into his only jam of the game, to motivate [yell at] him to concentrate on getting out of the inning.

The Rangers lost this game with C.J. Wilson in the midst of a difficult string of starts. The team ended the month of July with an 18-9 record. As impressive as that record seemed, from the beginning of the month until this final game, the Rangers weren't able to add to their AL West lead. For a team that won a dozen consecutive in the middle of the month, that could have been looked at as a disappointment. However, the Rangers continued to face a cycle of injuries to their best hitters which left the team not at full strength for most of the season.

The fact that the Rangers, on July 31st, had not been out of first place in the West since May 15th continued to show their resolve.

At the end of July the Rangers had statistically one of the worst bullpens in baseball. So, on July 30th, the Rangers acquired Koji Uehara from the Baltimore Orioles for fan favorites Chris Davis and Tommy Hunter. And then, just before the trading deadline, Mike Adams was acquired from San Diego for minor leaguers Robbie Erlin and Joe Weiland.

Adams and Uehara were considered two of the best available relievers and the Rangers were hoping that they had turned a glaring weakness into a strength as the dog days of summer approached.