The Rangers are practicing for when they play baseball this season. Need proof? Here's a photo from our very own BigGuns who is in Surprise right now: 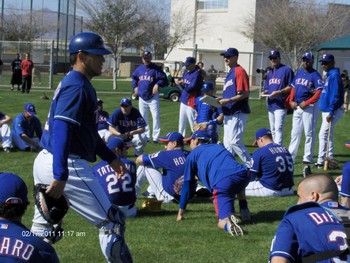 Evan Grant has a live-blog up with updates from Spring Training about everything from the pitcher's throwing schedules to Ron Washington telling Tommy Hunter that he has to earn a rotation spot. (As far as I know, this isn't behind the pay wall.)

Here's another piece about Brandon Webb from Richard Durrett. It's cool because it has a video of John Kruk on a giant party bus attached to it.

T.R. Sullivan harkens back to the days of 2008 and proclaims that the Rangers as having a wealth of depth at catcher. It worked out well last time.

Jesse Sanchez looks at the youth of the Rangers pitching staff and talks about how the Rangers can survive without a true ace as they did for much of last season.

JJT says that Miguel Cabrera's issues provide a cautionary tale for the Rangers in regards to signing Josh Hamilton long-term.

Durrett also has some notes from Mike Maddux on how some of the staff are looking after the first day of drills as well as an update on pre-arb signings.

The latest PECOTA projections has the Rangers winning the West with 84 wins. You can read the rest of the predictions of the AL West if you are an ESPN Insider member.