Maybe the day is appropriate. Our lefty starter gives up a jimmy-jack in the second inning. He lasts 4 2/3 innings of lackluster ball and leaves with the Rangers down 4-0. Jon Lester is on. Jon Lester is June 6, 2009 on. 9 innings, 11Ks. Red Sox win 8-1 after the bullpen janitor gets blitzed in the 6th. Uh oh. Now allow me to direct you to your calendar and point out the following: April Fool's!

Truly there is only one thing to celebrate today and it isn't prank calling your grandma or seeing what lame "invention" Google came up with; it's our Opening Day. We're signing up for another year that will test our mettle as often as it rewards our reverence. That's where it's at. That's baseball's sweet spot and is one that only baseball can offer. Today, we will celebrate willingly devoting ourselves to this game for another year, each and every day. It's possible the above scenario could play out, but regardless of the outcome, around Three O'Clock this afternoon, we're bulletproof again because baseball is back.

Fools? Maybe. Maybe it is foolish to find obligation in a sport. We've heard this winter about bad traffic & heat, manipulation & misleadings, differing management styles, and shambles. There have been tweaked groins, cold bats from big names, uncooperative shoulders and vanishing release points. We've worried about the closer, the closer starting, the 8th inning guy if the closer starts, the possible 8th inning guys now that the once-thought 8th inning guy was named a starter, and 3, 4, & 5 guys. But none of the fretting matters today because there's baseball to be played, American League Champion worthy baseball, and it's not going to stop for hand-wringing. Nor should it. If ever an Opening Day was worthy of our allegiance, it is today's. Not just because of 2010's successes. Not only because of 2011's promise. But because, out of the shadows of unprecedented success, the sun shines down upon this team waiting to thrill anew. We have 162 games to be fools for loving this game once again. This time, perhaps, they'll finish the job and fool 'em all.

"There's always next year." "We'll get 'em next year." "Looking forward to next year." These are phrases heard from sports fans in cities all across the country as their team slips out of contention and their hopes move toward the next season. Well, somehow, that's true for these Texas Rangers even after unprecedented franchise success and the faith of a good season. It's next year now even for winners.

One problem I've had, after the Rangers World Series run, has been figuring out when it it felt like the page had turned. When Nelson Cruz swung through that Brian Wilson fastball, it felt sure like there was still baseball to be played. As the team lost the Cliff Lee sweepstakes, it still didn't feel over. When Adrian Beltre was signed and Michael Young moved off of third base, spurring discord between the front office and Young, I felt like nothing had truly changed. Even when Chuck Greenberg, who had either been on the peripheral of our minds or directly the face of our new ownership all season, resigned from the organization, I still didn't feel the 2010 story had finished. Perhaps I just have trouble letting go.

But now, hours from the new season, I feel it. 2010 was a great memory but it is now just that, a memory. The 2011 Texas Rangers are here now. I can't wait for the new challenges. I'm eager to see all of the new ups and downs unfold. This will be different and that makes it exciting. I don't think I've ever been more ready for baseball.

Perhaps one of the most exciting things about this opening series is the fact that our defending AL champs are going up against everyone's 2011 Paper Champions of the American League. The Boston Red Sox are the favorites in the American League this season. Whether it's 29 of 30 staff members at Baseball Prospectus picking the Red Sox in the East, or John Kruk surprising no one and picking a Red Sox vs Phillies World Series; the Red Sox are a popular pick to not only win the American League, but the World Series as well. And with good reason. Here are some highlights of Red Sox ZiPS projections (PA/AVG/OBP/SLG for hitters, IP/ERA/K9/BB9 for pitchers):

The Red Sox are stacked. They're going to kill American League pitching. They appeared to shore up their bullpen with the signings of Bobby Jenks and Dan Wheeler. They weren't a great fielding team last year but Carl Crawford and Adrian Gonzalez should help. And if Josh Beckett bounces back, Daisuke Matsuzaka pitches well enough to be pretty much the best #5 starter in the American League, look out. They could just run away with it.

Of course, they're also counting on Jarrod Saltalamacchia, gave a job to Dennys Reyes, and have Jacoby Ellsbury leading off for them. Perhaps there's hope for the rest of the American League yet. 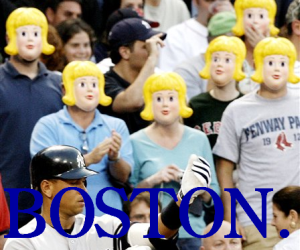