There is going to come a day when the Rangers don't win eight of the nine games they play. It could begin as soon as today when the Rangers ridiculously play their first of three consecutive noon games in Detroit. Maybe it will start because the Rangers are facing Justin Verlander and he is really good. Maybe Josh Hamilton won't find his power stroke because, unlike actual Superman, Josh Hamilton doesn't get his power from the yellow sun and the rest of the team will stop seeing the ball as well as they have been.

It could be that it will just be "one of those days" like any other of the dozen or more "one of those days" you can expect out of a baseball season. At some point it won't be as great as it is right now. Probably. It's only fair to assume that. But that's the thing about momentum in the sense of movement. Where does it end? What stops the Rangers from continuing their rampage through the American League? It seems clear that eventually it will slow down but it is unclear exactly how it will happen.

Momentum as a sports idea is often rolled out as the ultimate cliché. It's the father of "Chemistry" and a brother to "Grit," and "Clutch." Momentum in sports is completely unquantifiable and yet with every hint of a run possibly made by a team it is momentum that is thanked, not process. Momentum is summoned and once the team has it, the other team does not have it anymore. Before the other team can try to win, they have to take momentum away. Sports become a game of capture the flag within the game itself.

In baseball, specifically, it is said that momentum is only as good as the next day's starter. That makes a lot of sense to me. However, you can see a team have stretches where the majority of the players do their jobs at or near the best of their ability. And then the next guy tries to do the last guy one better. There is a sense of momentum there. It is confidence. It is competitiveness. And I think that's what the Rangers are experiencing right now.

The Rangers are playing a game of one-upmanship. It isn't mystical. It isn't even entirely extraordinary because what we're seeing is the Rangers at peak ability and there's no reason they can't do that for stretches at a time like we are seeing them perform right now. The extraordinary thing is how well the team plays when they are at their peak. That's the special part of these first few series. Even when the waning comes, we know what the waxing looks like. Or, maybe the Rangers will continue to win at an .889 clip. What do I know? They have the momentum.

It's too early in the morning for baseball. 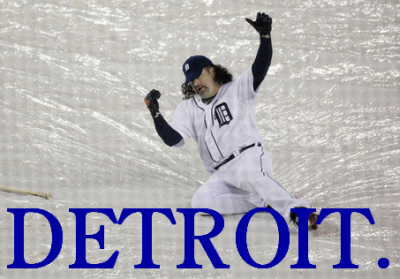