Remember when there was a time when every special Texas Rangers season, where they fought their way to those ever elusive postseason spots, ended at the hands of the New York Yankees? Losing to a team to officially end your season breeds contempt. Contempt, in the world of sports, if left to fester or multiply, becomes hate. And hate is how a rivalry is made. Sorry, Houston. No boot, silver or otherwise, is going to make us rivals. It's just a fact of sports fandom.

All of us, as Texas Rangers fans, were probably pretty ambivalent to the San Francisco Giants until November 1st of last year when they eliminated the most fun we have ever had watching baseball. Now, I doubt you could find a Rangers fan that is either unaware of the Giants or likes them at all. The Giants and Rangers aren't rivals now, however. There's just not enough history there. But our opinions of the Giants franchise has changed from being irrelevant to our interests to the team that wears the ring we wish our team was wearing.

Finally it is the Yankees that know what it's like for a year of hard work to be ended by the Texas Rangers. The Rangers and Yankees aren't rivals yet. But they could be. We've always felt a sense of rivalry with the Yankees as Rangers fans because they beat our team in all of our franchise's playoff attempts prior to last season. However, it takes two to tango in a sports rivalry. To the Yankees and Yankee fans, the Rangers weren't even a speed bump on their way to a revived dynasty. It's like saying the Michael Jordan Bulls had a rivalry with the Cleveland Cavaliers. There's no reason to work up a lather over a team you always prevail against. Until now. Because now the Rangers have ended a Yankees season. Now there's a reason for their team to consider ours a challenge.

It won't happen because of that one series win--The Yankees aren't rivals with the Marlins, for example--but if the Rangers are serious about being a longterm contending team, they'll have to get through the Yankees again when it matters. And if it happens enough times, if these two teams battle each other over the next few seasons in playoff contests, a true rivalry could be born. And if it does happen, it might be the first honest non-forced/divisional rivalry our Rangers have ever earned.

It's difficult to predict what the Yankees will get out of their starters in this series. Ivan Nova has nine career starts to his name. In his 10.1 innings pitched this season, in two starts, Nova has a 6.10 ERA but a 3.37 FIP which is pretty meaningless. Nova has never faced the Rangers in his career.

Freddy Garcia has been Dave Bush'd this season so far thanks to some timely rainouts. Garcia did get one inning in against the Red Sox in relief and allowed a run but he has yet to make his Yankee starter debut.

It's difficult to predict what the Rangers will get out of their starters in this series. The Harrison, Holland, Ogando trio has been better than even the Ad Wizards could have advertised so far this season. The Rangers bottom three have begun the season with a combined 6-0 record with a 1.15 ERA. However, Ogando has two career starts to his name and both of them have ended prematurely because of a blister that doesn't get reported as a blister by the Rangers for some reason. In his 13 innings pitched this season, in two starts, Ogando has no ERA but a 3.89 xFIP which is pretty much meaningless. Ogando has obviously never started against the Yankees but he did pitch pretty well in 2.2 scoreless regular season innings against them though he did allow a run in his two innings in the ALCS.

If you look at the peripherals, Derek Holland might be the Rangers best starter this season. He has the best FIP, K rate, and is second in xFIP while tied with both Ogando and Harrison in WAR through two starts. That doesn't really jibe with the eye test so far. Based on watching each starter this season, Ogando and Harrison appear to have been the better pitchers. Holland will get a good test in this series as there's no team he's faced more than once in his career that he's pitched worse against than the Yankees. For his career in the regular season against the Yankees he is 0-2 with a 9.49 ERA in 12.1 innings. Although, in the ALCS he didn't allow a run in 5.2 innings pitched.

The Rangers are 3-3 on the current road trip. A series win and an above .500 trip would be excellent, but even if the Rangers drop this series, without getting swept, 4-5 wouldn't be too bad for the first trip out into the cold of April. I'd have taken a 4-5 road trip going into it. 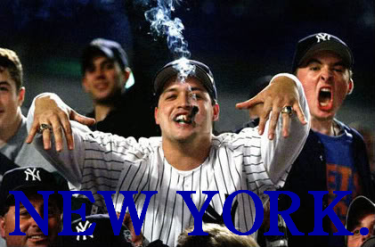