As much as the media seems to pity and play up the heat in Texas in August, I think I wouldn't trade the blast furnace for April East Coast weather. The Rangers ventured out east on a nine game cold and wet road trip and somehow find themselves returning home only tied for the AL West lead. The Rangers are a warm weather team. So here we are, nearing late April, and the Rangers are already in for an AL West showdown. Rangers v. Angels. Texas v. California. Vernon Wells v. Michael Young. 70's Nolan Ryan v. Like 70-year-old Nolan Ryan. This is like a brand new opening day. This is like opening up conference play.

The fact that it is the Angels that the Rangers meet for the rights to an early division lead seems appropriate. While Oakland was the late spring trendy pick in the West -- and they very well could be playing for the division lead when the Rangers travel to Oakland later this month -- it's not like the Angels were ever going to let us get through a season without reminding us that they exist. And while the Rangers were able to put the Angels away relatively early last season, this is still pretty much a similar team to the one that won the division the previous three years before that.

So this feels like it's a big series in that it is at home and the Rangers will be facing their first real challenge to their rightful lead in the division, against what is now their biggest rival, but it is ultimately only as meaningful as any of the other series they will play afterward. You'd just really like to see them win this one. It's the Angels. They're in Texas. The wire-to-wire lead is on the line. And it's the Angels.

The Rangers might catch a break in that they will be missing Dan Haren in this series. However, they still get to face Jered Weaver and that's become one of the bigger challenges in baseball. There was once a time when Jered Weaver was a guy who struck out about 6.5 dudes per game. He was a good pitcher. But he was probably a little overrated because of his hype coming out of the draft and Angels fans being the overprotective type that they are.

Where they would scream: "GREAT PITCHER! CY YOUNG CONTENDER!" pretty much anyone else would look at Weaver and say, "Well, good pitcher but probably not a chance in hell he wins a Cy Young. He's basically Todd Stottlemyre." Well, sadly, they were right. They weren't right about why they were right because Jered Weaver has transformed himself, but Weaver is both a great pitcher now and is a contender for the Cy Young Award.

So how did this happen? Well, the 6.5 K rate became 7.7 the next year, and then 7.4 the year after that. So that's where you expected it to plateau and Stottlemyre out. Instead, last season, Weaver's K/9 rate shot up to 9.4. Where once Weaver was living in the Matt Garza 6.5-7.5 range of K/9, he suddenly became a strike out pitcher more in the Josh Johnson, Justin Verlander, Francisco Liriano 9.0 K/9 vein. Or, you know, the range where excellent pitchers live. This season, Weaver is at 10.08 K/9. He hasn't lost his newly found ability to strike guys out at an excellent rate. And thanks in part to his ability to miss bats or otherwise fool hitters into not swinging at strikes, he's 4-0 with a 2.84 FIP and a WHIP better than only his teammate Haren, the aforementioned Johnson, and our Alexi Ogando at 0.80.

Of course, Weaver's 89.1 LOB percentage and .177 BABIP clue you in that Weaver's early overwhelming success isn't completely sustainable at the current level. But as long as he continues to strike guys out, he's going to one of the best pitchers in baseball to all of our chagrin.

And yet, also, the Rangers get to face Matt Palmer. 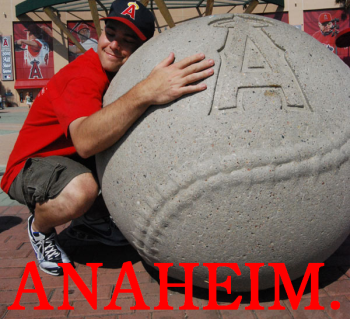