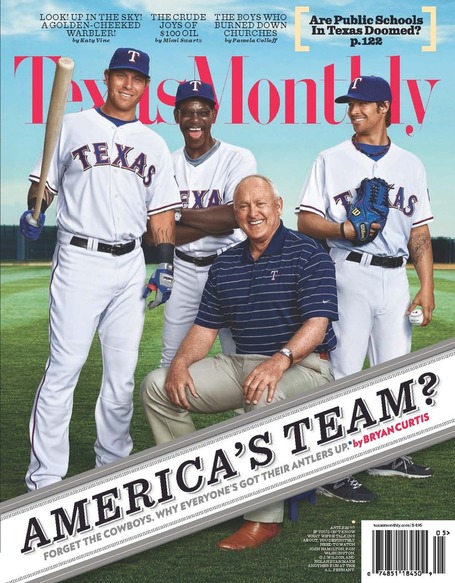 The cover story for this month's issue of Texas Monthly is about the American League Champion Texas Rangers.  The magazine is on sale at news stands now, and the story is also available (behind the paywall) at Texas Monthly's website -- so you can read it in full here.

And if you follow after the jump, the folks at Texas Monthly were kind enough to let us run an extended excerpt of the story for LSB readers...

My name is Bryan, and I am a Texas Rangers fan.

It was game four of the 2010 world series, but it felt like a reunion. Fifty-one thousand of us had descended on Arlington. I’d arrived on a zigzagging, cross-country flight and paid a fortune to an Internet scalper for a perfect seat—which, it turned out, was right behind a post. Well, fine. I deserved it, as you’ll see in a second. I was giddy just to be inside. Rangers Ballpark, a red-brick Sunbelt temple, finally felt as important as the pennant-filled parks back East. Hank Aaron was waving from the infield grass. George W. Bush threw out the first pitch. Chuck Morgan—the voice of God for us kids who grew up Rangers fans—belted out the team’s starting lineup, and for once the names ("Josssssh HAM-il-ton!") matched Morgan’s enthusiasm.

A bit of history: The Rangers arrived in Arlington during Nixon’s first term. They didn’t reach the playoffs until the Clinton administration. And it wasn’t until Dubya, their former owner, had cleared out of the White House that they made the World Series. Even then, the Rangers faced a number of almost unfathomable obstacles, as if the bony hand of Babe Ruth were rising from the grave in protest. In the space of six months, manager Ron Washington admitted to having used cocaine. The franchise declared bankruptcy. The Rangers were sold at a Fort Worth courthouse in an auction not unlike the ones where the police sell the ill-gotten spoils of drug dealers: "One major league franchise, barely a scratch on it!

I looked like a Rangers diehard, right down to the vintage baseball cap (the superior 1972–1985 model, with the red bill and the block T ). But I had a dirty secret. Once a Rangers-mad kid, I’d bailed on the team long before its "claw and antlers" renaissance. I still rooted for the Cowboys, who had won three Super Bowls in my four years of high school. In the same period, the Mavericks had been operatically bad, which, perversely, bound me to them for life. (You could score loads of autographs after the games: "Right here, Mr. Mashburn!") But the Rangers? How to explain what had made them, for a kid coming of age in the early nineties, so uncool?

First, the old Rangers were not a good baseball team. The only memorable book written about them is called Seasons in Hell. Around the country, mentioning you were a Rangers fan typically solicited . . . nothing. But it was an unsatisfying kind of loserdom. Look at some of the names that percolated up through the franchise over the years: Mark Teixeira, Alex Rodriguez, Iván "Pudge" Rodríguez, Juan González, Sammy Sosa, Kevin Brown, Kenny Rogers, Rubén Sierra, Julio Franco, and Nolan Ryan—not to mention Jeff Burroughs, Al Oliver, Fergie Jenkins, Gaylord Perry, and Bobby Bonds. The Rangers had great talent, and they wasted it. They were doomed to be what pro-wrestling promoters call a mid-carder, a nice-enough team that would contend for second or third place in the AL West. "Not horrible," said one of the team’s new owners. "Just kind of there."

The culture of the franchise didn’t help either. Arlington was an absurdly friendly place, full of kind men who tucked polo shirts into khaki shorts. "If a player ever got booed in Texas," Al Oliver says, "it was his fault." As a teenager, I had my own growing anxieties about Dallas–Fort Worth life. And that friendliness—that sunny contentment as the world passed by—was just the kind of thing I was anxious about. I left Texas behind, and with it, the Rangers.

Now in my thirties, I had returned. I had become exactly the kind of sports fan I hate: a bandwagon-riding poseur who waits for a team to win and then shells out a few hundred dollars for the best (obstructed-view) seat in the house. Jeff Francoeur, a former Rangers outfielder who is now with the Royals, told me a story: On Sundays this past fall, he watched fans filing out of Cowboys Stadium, which sits across from the ballpark. These fans would walk a few feet and then shed their Cowboys jersey for a Rangers jersey underneath, molting like the North Texas cicada. I laughed. But deep down, I knew that jersey-changer was me.

No matter. These Rangers made coming back easy. The team’s culture was one of self-improvement, redemption, and recovery. After his cocaine revelation, Washington repented loudly and profanely ("I f—ed up," he told a newspaper columnist). Left fielder Josh Hamilton, a former crack addict, was leading a national Christian revival tour. The team’s number two starter was "straight edge," a salesman for an abstinent life. This kind of stuff is not uncommon in sports. But the Rangers were so open about it that it had become a mantra. The Rangers were an AA meeting in spikes.

The lethargic sensibility that so offended me had changed too. Jim Sundberg, a talented catcher who started playing Arlington in 1974 and is now a team executive, imagines an intensity scale that ranges from one to ten. Today’s Rangers? "We’re at an eight," he says. And what about the old Rangers? "Maybe a two." The transformation, he explains, was due to Nolan Ryan, who was sitting on the front row at my right. Ryan joined the Rangers as the team president in 2008 and then, last fall, bought the club with several partners. Ryan already had a highway in Arlington and a field at spring training named after him; like no other Ranger, he seemed to radiate legitimacy. "People in Texas agree with everything that comes out of his mouth," says second baseman Ian Kinsler. George W. Bush impishly observed that the team had tapped Ryan to throw out the first pitch in game three of the series. The former leader of the free world would have to wait till game four.

Yes, they looked like the same old Rangers that October night, letting a young pitcher for the San Francisco Giants named Bumgarner and a stingy home plate umpire tie them in knots. The following night, in game five—I’d moved out from behind the post and into the upper deck—they got only three hits and lost the Series. We fans stayed for a while, chanting, "Let’s go, Rangers!" while the Giants celebrated. Something significant had happened: The Rangers had set themselves up to be contenders for many years to come. They had finally made their mark on baseball—and, well, on me. After rediscovering them, I set out with the zeal of a convert to find out just what it is that makes them tick. To write a Boys of Summer treatment for a team that never, ever deserved one. In turn, they rewarded old and new fans alike by starting 2011 as if the previous season had never ended. So yell it out with Chuck Morgan: Ladies and gentlemen, your (profoundly interesting, oddly moving) Texas Rangers!