There's an aspect to watching your team go to the World Series that the rest of the league's fans don't tell you about when you join the Pennant Society. It's all handshakes and "Welcome, big guy!" with a slap on the back. But it's waiting. It can only be experienced once you get there. It's like the brim of confidence at being the new guy in charge. You worked hard. You achieved. Now here's the real task: managing the devil known as expectations. Every move you make has a cascading effect on everyone it influences. There are people that go through life dodging expectations simply because the burden of proof and the responsibility of heightened awareness hang over their heads like a menacing pendulum of future guilt and remorse. But it is better to have tried and lost than not to have tried at all, right? And while no one would trade watching our team in the World Series for the lowered expectations of irrelevancy again, with the ascendancy comes the ever dangerous notion of elevated levels of what constitutes success.

So how does a new member to the "We were in the World Series!" club temper expectations? Well, sweeping the presumed World Series favorites in the first series of the season doesn't help in that regard, but it does deliver a Ron Washington-sized teachable moment. Who had more expectations going into this season than the Boston Red Sox? Not only was their off season so heralded that the assumption became by practically everyone that they would win the World Series, but the Boston media was already trying to work up a "best team ever?" fervor. But even though they looked awful in getting swept by our Rangers it doesn't mean that they aren't good and should expect to lose. Instead, the expectations should be that they can win the World Series, but might not, and they might not be the best team ever but are instead a very good one.

Of course, the other cautionary tale is the one of these Seattle Mariners the Rangers will play beginning tonight. In 2010 they had the heralded off season. The Mariners were the team many prognosticators were predicting to win, not only the west, but in some cases, the American League. They were not the favorites, perhaps, but they were expected to win. And they did so to the tune of a 61-101 record. So as the Rangers traverse the schedule this season with the many highs and lows one can anticipate from a baseball season, we would do well to expect only that baseball is unpredictable. But that's a rationality rare in being a sports fan. I do expect the Rangers to win, I'll admit. But I trust more that the Rangers will take themselves as far as they have the ability to go. And I find comfort in that far beyond the entitled hope of expectations.

In this series the Rangers will face Erik Bedard who has had trouble with injuries ever since he was traded to Seattle in 2008. However, the Mariners are hoping to get production out of him the same way the Rangers are looking to get production out of Brandon Webb. Cross your fingers and pray. Bedard was a very good pitcher before being banished to Seattle from an even worse kingdom in Baltimore. For his career he has gone 4-2 with a 3.12 ERA with a 2.88 K/BB rate in 66.1 innings pitched against the Rangers. This includes that ridiculous game in 2007 where he struck out 15 Rangers while allowing only two hits in a complete game shutout. However, Bedard hasn't pitched in a big league game since July of '09 so it is difficult to know what to expect.

After Bedard the Rangers will face the Mariners top pitching prospect and sleeper Rookie of the Year candidate Michael Pineda in his major league debut. These kinds of games scare me because the Rangers always seem to have a knack for letting pitchers they are facing for the first time completely dominate them. And for what it's worth, we'll probably be seeing Pineda doing a lot of that over the next several years. The 22-year-old Pineda was 11-4 in 25 starts between double A and triple A last season with 154 Ks to only 34 BB in 139.1 innings. This would be exciting to watch to see a bright young starter coming into the league if it weren't for the Mariners and it weren't against the Rangers.

Finally, the Mariners will run Felix Hernandez out there which, jeez. No thanks.

The Rangers counter with Derek Holland's 2011 debut tonight. He will be looking to display the maturity and growth that apparently the Rangers young lefties caught like a viral infection down in Surprise, AZ while trying to get his breakout season off to a good start. Holland is 2-1 with a 4.00 K/BB in 22.1 innings in his career versus the Mariners but only three of those innings came in 2010.

Alexi Ogando makes the start on Tuesday because...well, you know why. Unless Ogando becomes mythically great at starting right out of the gate, it probably won't be long before he's back in the pen. However, for now, the Rangers are hoping to get 5 to 6 innings of quality work out of him each start over the next month and a half. Ogando certainly has the stuff and ability to do so but the Rangers will probably be pretty cautious about pushing him too hard in an unfamiliar role.

Finally, the Rangers will run C.J. Wilson out there which, yay! Sounds good. 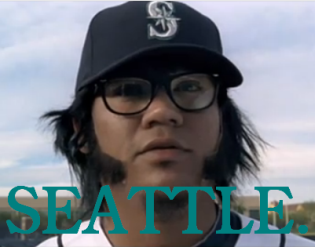