In 1993 my family slowed down their constant upheaval of my life by not moving for a year and a half allowing me to play my first, and only, full season of little league. After mowing my aunt's lawn and going with my grandmother to the city dump to collect composted manure for mulch for her flowerbeds, I had earned the $35 entry fee to tryout for a team. After taking a few ground balls from short and third, shagging a couple of fly balls in center and taking a few cuts off of a pitching machine, I was selected by the coach of the Bossier City Orioles.

We nicknamed ourselves the Oreos because to kids that's what Orioles sound like. The coach was taken by the nickname and brought us cookies for after practice. I'll never forget getting that black and orange uniform. I'll also never forget the first time playing in a black uniform on a 100 degree Louisiana summer's day. I played third until my throws started becoming erratic. Then I played right field where I made spectacular sliding and diving catches the same way Nate McLouth won a gold glove, terrible range made to look amazing by barely getting to the ball and diving to catch it. That summer tested my loyalty. I was an Oriole. Maybe I should root for the Orioles. I even tried it on for size for a couple of games.

Those Orioles had Ben McDonald, a Louisianian like me. They had this quaint looking manager with a mustache named Johnny Oates. And they had Cal. But it was those special trips to Arlington to see the Rangers and those summer nights at Arlington Stadium, along with, strangely enough, Greg Lucas and Norm Hitzges on HSE, that always brought me back to my senses. I was a fan of the Rangers for life while the Orioles were just a summer flirt. I guess, in these memories, I've always held onto something resembling tangential affinity for the Orioles since that summer, until last July.

The Texas Rangers won 98 games last season. The Baltimore Orioles won 66 games last season. And yet, somehow, the Rangers had a 4-6 record vs those Orioles including a 2-6 record after a Rangers early May two-game sweep in Arlington. And then there was the forgettable series in July that taught me a lesson. In baseball, there's no room for a second best in your heart.

Guess who's back? Vladimir Guerrero is back. And I guess Buck Showalter is back but he has this job for like two more seasons before seeing his efforts stall and then worming his way into a new makeover job somewhere else. But, digression aside, perhaps the best player on the Texas Rangers in the first two months of the season last year was Vlad Guerrero. So the question is, now that Vladdy isn't an Angel and has been a Ranger, is he still a Ranger killer? I guess we'll find out. But don't forget, this is the guy that from 2004-2009 hit .395 with 22 homers and 67 RBI in only 87 games against the Rangers. So while we hated him until he joined the Rangers and then loved him for a little while only to then kind of start to hate him before liking him a little bit again before hating him a lot and then watching him unceremoniously leave, it could be that we'll be hating him again as he destroys the Rangers in a different uniform. I hope instead we get lame horse-legged jaunting, "he's just having fun out there," screwing up on the base paths, bone-on-bone stridin' Vlad.

The question mark next to Jeremy Guthrie's name in the pitching probables is there because he is coming back from a bout with pneumonia and it is up in the air as to if he will pitch in this series. There's no word on who will replace him if he doesn't go, either. If the Rangers avoid Guthrie they'll be avoiding a pitcher they've never beaten (Guthrie is 3-0 lifetime against the Rangers). The Rangers won't avoid Zach Britton, however. Britton goes tonight in the second start of his career. He is very good and he is a lefty. So, this has the makings of a perfect storm in terms of pitchers that traditionally dominate the Rangers. Let's just hope for rookie nerves, and therefore mistakes, while facing the best lineup he's probably faced in his entire life.

It's kind of amazing that the Rangers are baseball's last undefeated team and they are getting almost nothing from the middle of the order. Josh Hamilton specifically has been quiet (team worst 27% K rate). Adrian Beltre is getting BABIP'd to death (.105) so far. And Michael Young is apparently still getting used to DHing for most of his at-bats (second worst on team with a .292 wOBA). In fact, those three guys currently make up three of the four worst hitters on the team so far in wOBA. Of course, it's still all small sample at this point, but it's truly interesting to me that the Rangers have been as successful as they have been with the middle of the order contributing so little. In many ways, it makes me think that as things begin to even out--Mike Napoli isn't going to continue to have a .721 wOBA, sorry--the Rangers offense is going to be even more threatening. 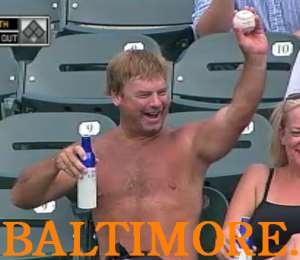