I don't get two game series. I suppose they're necessary for MLB to put out their complicated unbalanced, interleague-infused schedules every season. But, they seem like they could be avoided. Somehow. Some way. And frankly, they should be. I mean, the Rangers played all three games of their series against Baltimore earlier this season in about 24 hours. Nothing can be done to squeeze another game in here? All that this is going to do is lead to an awkward four game series somewhere down the road where that extra game knows, deep down, that it was meant for this series.

Although, after playing the Royals twice at Kauffman on Wednesday and Thursday, that's it. That's all of the times that the Rangers will play the Royals in Kansas City this season. Two games. All season. That doesn't seem right.

The fact that the Rangers have to travel to US Cellular Field for two games before packing up and traveling a tad south to Kansas City only to enjoy their stay for another measly two games before having to go east to face the Phillies seems weird and wrong. It's unnatural is what it is. The last time the Rangers had a two game series they split 'em with the Oakland A's and we all remember why that was terrible.

So, in protest of the existence of two game series, I'm combining these two abominations into one medioce/bad AL Central amalgamation four game series.

Monday, May 16 7:10 at US Cellular Field: RHP Colby Lewis vs. RHP Edwin Jackson

Tuesday, May 17 7:10 at US Cellular Field: LHP Matt Harrison vs. LHP John Danks

Even though I'm pretending that this is one series, one thing is clear, the Rangers will be playing in two parks that play very differently. While Rangers Ballpark in Arlington is notoriously a hitter's park--to the point that it has been mythicized into something of an AL pre-humidor Coors Field as a place where an unrelenting torrent of home runs are hit in every game by the sports media and casual fan--it is actually US Cellular Field where one would want to go to see a lot of dongs.

Going by Stat Corner's Park Factors (listed below), which determines anything above 100 (All relevant stat by or against a team at home are divided by all relevant stat on the road. This is used to measure the park's effect on things such as home run rate, wOBA, and GB/FB/LD rates) to be hitter friendly and anything below 100 to be pitcher friendly, has US Cellular field at 123/139 (LHB/RHB) for home run production compared to 117/118 for Coors Field and 120/109 for RBiA. However, in wOBA, which measures a team's ability to get on base, both Coors Field (108/112) and RBiA (103/106) out-pace US Celluar Field (102/104).

On a drastic flip-side of this coin, Kauffman Stadium makes US Cellular Field seem like a little league park. Kauffman's home run Park Factor is 74/86. When compared with other noted offense-suppressing ballparks such as the Oakland Coliseum (91/78) or Safeco Field (94/84), you can see that it is difficult to hit a home run at Kauffman Stadium even by pitcher's park standards. Kauffman Stadium yields a 103/100 wOBA rate versus 95/94 for the Coliseum and 96/96 at Safeco, so it still might be easier to score runs overall.

So, while the Rangers offense might feel a little more at home at US Cellular, much to Matt Harrison's chagrin, Derek Holland might be a little happier that he gets to pitch at Kauffman. You know, if Derek Holland weren't far busier browsing the Internet looking for a Mutts Cutts t-shirt. 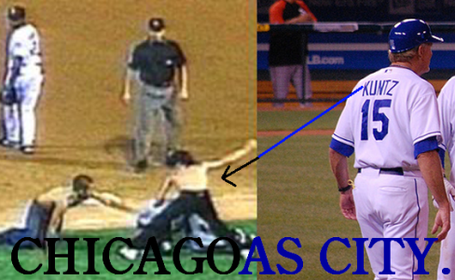