You're going to smile that smile, but I know it's not for us anymore. You're going to shake hands with Ian Kinsler. You're going to ask, "Hey, where's Tommy and Josh?" You'll probably share a knowing, but awkward hug with C.J. Wilson. We'll wonder if you're happy, though rhetorically. Of course you are. Not that it matters too much. You probably have a couple of those new enormous paychecks, your ace-laying poker buddies in Philly, and that nice weather your wife was so worried about. Those World Series promises are as faded as an oft-washed Claw and Anters T-Shirt.

If it feels like going over to an exes apartment to pick up some CDs and a toothbrush while the guy she left you for is over tooling around on his guitar in front of you, it's because that's exactly what it is. And so, we have two options here. 1: Leave an upper-decker in the bathroom. 2: Tell the new guy that yes you've heard of his band and yes he does play a pretty mean bass. Sure, the highroad seems like the best option. It seems like the right thing to do. You're mature. You're over it. The best revenge is living well, right? But no. Not this weekend.

You left because of heat in Texas while living in ARKANSAS? What is that? That doesn't even make sense! And honestly? His band is overrated.

Who's ready for pitchers hitting?! Or worse, who's ready for hitters hitting as well as pitchers hitting? That might be what we can expect in this series. Roy Halladay and Cliff Lee are Roy Halladay and Cliff Lee. They're good. They're two of the best pitchers in baseball. Roy Oswalt is also pretty good. He isn't Halladay or Lee good, but he's probably the fourth best pitcher who will take the mound in this series behind those two fellas and C.J. Wilson. And, really, if Luke Hochevar can do what he did to the current Rangers offense, what's stopping Roy Halladay, in a league without a DH, from pitching a 27-strikeout perfect game? Almost nothing. And why? He does stuff like this, that the guys at Baseball Analytics sent me, to people like Adrian Beltre. That's just unfair (and probably literally unfair if you notice the calls Halladay gets in this particular match-up).

Interestingly enough, however, the Rangers have traditionally had a modicum of success against each of the Phillies starters in this series. Not spooky only-the-Rangers-are-good against them success, but games recently where the Rangers have handled all three of these Phillie Aces.

The last time the Rangers faced Roy Halladay was on April 21, 2009 when he was still a Blue Jay and not yet hiding behind the skirt of National League baseball. Halladay allowed 5 ER in 8 innings for his first loss of that season. For his career he is 7-7 against the Rangers with a second worst career WHIP of 1.416 against any team he's pitched more than 20 innings to.

The last time the Rangers faced Roy Oswalt was on June 27 of last season when he was still an Astro and still hiding behind the skirt of National League baseball. Oswalt allowed 7 ER in 4.2 innings. He was terrible. For his career he is 4-6 against the Rangers. In 81.1 innings versus the Rangers he's given up 94 hits, 41 runs, and 14 home runs.

The last time the Rangers faced Cliff Lee...I guess you could say Richard Durrett has that covered here and the Rangers didn't exactly win but they might not have lost, either. But we'll always have Opening Day 2009. 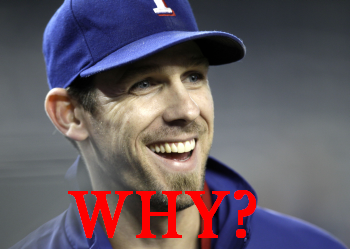