By ghostofErikThompson@apoplecticfittz Updated May 27, 2011, 3:00pm CDT

The 28th of May will mark 19th anniversary of the first Rangers game I ever attended. In 1989, when I was 7 years old, my mother remarried to a man who himself had two kids. This is important to the story only because of space. My step dad had just traded in my mom's old sedan that she had for the first couple of years that they were married for this enormous, and to a kid, amazing van. My life improved dramatically because of this decision.

Before, whenever everyone in the new family had to go somewhere, the four of us unsure-of-each-other kids had to sit in the backseat. There was his youngest against a door, then his oldest, then me, and then my sister, always in that order. No one wanted to sit by his youngest, he was the weird one, so his brother had to do it and my sister didn't want to have to sit by "any of the boys!", so she sat by me because I wasn't a just some boy, I was her malleable younger brother. So his oldest and I got crammed in the middle. As you can imagine, four step-neglected kids being packed into a small car made trips hell for everyone. So my mom and step dad made what I will declare the best decision of their marriage and got the world's sweetest van.

Now, before I get to the part where I saw a Rangers game, let me tell you a little more about this van. For one thing, it was huge and had a TV in the back. There are no other things. That's all you need to know about why it was great. But then my step dad told us that the two seats up front behind the driver and passenger seat were called "Captain's Seats" so of course we all wanted to sit there. So while we still fought over seats, at least now each seat had a perk. The back, to a child, felt like you were a million miles away from the eyes of your parents, and it folded into a bed so you could watch TV and lay down. But the most notable perk was not having to sit next to the strangers my mom married into my life.

Because of this van, we could take trips without my mom and step dad wanting to divorce mid-trip. Because we could take trips, we could go see the Rangers as I wouldn't shut up about. Because I wouldn't shut up about it, we all went to Arlington to see a baseball game. We sat in the third base side of that upper deck area at old Arlington Stadium because that's the tickets we could afford that were actual seats which were way more impressive to my mom than the bleachers. It was somehow a blustery mid-50 degree late May Texas night so, other than the two Rangers logo throws we over-spent on from the gift shop, we were ill prepared for the weather. I never once cared because I was about to see baseball.

The Rangers were playing the Chicago White Sox that night, with whom they had a kind of burgeoning rivalry brewing back then. A rivalry I feel was only killed by the divisional realignment that would happen a couple of years later. I had watched the White Sox for a whole summer previously on WGN and had seen enough to know they were a distasteful lot. One thing was for sure, I hated Ron Karkovice. The Rangers won. Tim Raines had the first hit I'll ever see in person. Frank Thomas hit my first home run, Lance Johnson drove in my first run, and Dan Pasqua hit my first double. And yet, I saw Dean Palmer and Ruben Sierra hit doubles, Rafael Palmeiro and Ivan Rodriguez drive in runs, and Bobby Witt strike out 7 White Sox to beat a then 7-2 Black Jack McDowell. This was legendary stuff I was seeing in my mind.

Perhaps the lasting memories of that trip was when the Rangers had McDowell on the ropes early in the game, he tried the ol' look fake throw to first then fake throw to third pick-off move at least a dozen times (note: probably actually only three or so, but it seemed like a dozen when I was 10) as the boos rained down from the upper deck. Also, the Arlington Stadium Men's Room pee trough. And, finally, on the way home, after the exciting win for the then first place Texas Rangers, I gave up a claim on the Captain's Seats, and sat quietly in the back copying my scorecard from the game into a makeshift box score so I could memorize it when I got home. All of this just because we needed a little leg room.

Hard Hitting Analysis: The Royals are bad but will someday soon not be so bad. 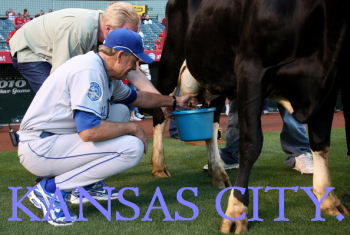