The last time the Rangers had the misfortune of playing a baseball game in Tropicana Field, they were only finishing up their first postseason series victory in franchise history. Now, the Rangers return to the scene of their heist looking to continue their success in a place they owned in October.

The feeling that I get is one of peculiarity when I look back on that series. Both the series itself and how it came to be to begin with. I know that I watched the Rangers from around July 1, 2010 on assuming they would play an ALDS series with near complete conviction. They were just better than the West. Usually, by July 1 of any season, you have a decent idea as to if you'll have something to root for for the remainder of the season, but the Rangers lead last season held so firm that the last half of the season became a waiting game in and of itself. Instead of just waiting for the season to end to think about next year, we were waiting for the season to end so we could enjoy the rarefied air of October baseball. In fact, the thought of Rangers playoff baseball was to a point of near certainty in my mind that the only questions, as I watched the season unfold, became about who the Rangers would play and would I like the Rangers chances to beat them. I rarely thought past the ALDS but the ALDS was always on my mind. Truly, that explains why last season was so different.

The only thing the Rangers played for for months was a shot at home field in the playoffs and when that was lost, one eye watched the magic number dwindle while the other one watched the race in the AL East as we knew the Rangers would play the winner of the crowned Best Division in Baseball. Unlike the Rangers' meandering saunter to the season's finish line, the Rays didn't wrap up the AL East division title over the New York Yankees until the final day of the season. The dynamic of knowing the Rangers would play in the playoffs for months but not knowing who they would play until two days before they would begin playing contributed to making the ALDS seem like a blur. And Cliff Lee. Cliff Lee's clarity contributed to the blurriness.

You know the rest of the story. The Rangers celebrated their first playoff series win on the Rays field in a warehouse when Elvis Andrus squeezed final popup in Game 5 as Cliff Lee moseyed into the waiting arms of Bengie Molina, never bothering to turn around to see the sight of Tropicana Field even once more. This series will feel different because there's even less of a reason to want to watch the Rangers play a game in Tropicana than there was when they had to go back there after not clinching the series at home on my birthday. But, at the very least, for as long as Tropicana is allowed to exist, it holds a special place in Rangers' lore. For a Texas Rangers fan, a reason exists to have fond Tropicana Field memories.

Remember when TAG and the baseball world wouldn't shut up about "folk hero" Sam Fuld? Let him be yet another lesson of the dangers of early season sample sizes. Fuld started the season with a .791 OPS, .360 wOBA, and 10.1% walk rate in the month of April. Of course, the .321 BABIP was a tad worrisome. So, now, in the month of May, Fuld has a .439 OPS, .190 wOBA, and a 2.2% walk rate in nearly the same number of plate appearances. Of course, his May .164 BABIP does lead you to believe that he's gone from somewhat lucky to extremely unlucky but his LD% was 22.4% in April to now 12.3% in May. So he's not taking walks and he's not hitting the ball hard anymore either. I'm sure he'll normalize into the Sam Fuld he's always been but the Sam Fuld he's always been is just Sam Fuld, not the NEW STAR IS BORN Sam Fuld that mid-April wanted us to believe. But hey, at least he got a superhero cape giveaway out of the whole deal. Brandon Boggs never got a cape.

Just because it shouldn't be forgotten: 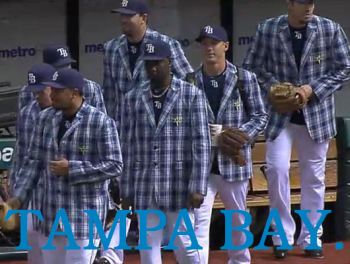