With as hot as they have been, I'm kind of sad that there's no Rangers game tonight. Oh well. Who's ready for the Home Run Derby and Free Slurpee Day?!

However, we can still bask in the sweep of the A's and the defeat of Trevor Cahill. That's what Louie Horvath does in his game story.

Randy Jennings of ESPN Dallas has his reactions to the Rangers' seventh straight victory and first half finale.

Behind the DMN paywall, Evan Grant recaps the Rangers winning ways heading into the All-Star Break.

Jennings has a piece about All-Star Adrian Beltre and his hot bat. Beltre has now hit a home run in three straight games and continues to hit them in big moments, including the game-winner yesterday. And, I think we can all agree with this quote from Beltre:

"Hopefully we keep the same momentum when we come back in the second half and try to separate ourselves from the competition."

In Futures Game recapping, T.R. Sullivan has a lengthy report on the Rangers contingent of Martin Perez and Jurickson Profar. All of it is supremely sexy.

Drew Davison writes some notes at the Star-Telegram about Derek Holland's immediate future, Josh Hamilton's swing being inspired by En Vogue, and the Return of The Gut.

Kevin Sherrington writes behind the DMN paywall about how Josh Hamilton, after everything we've seen this past week, is still the heart of the Texas Rangers.

Gil Lebreton looks at how the Rangers can maintain their first half lead in the second half and win the division.

Grant has his annual midseason grades for the Rangers. This time it is behind the DMN Paywall. However, this image accompanies the piece on the DMN Rangers home page, so it already deserves your $10: 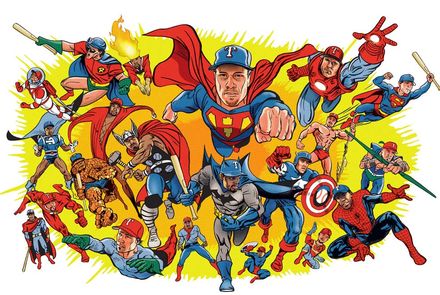 David Thomas beats AJM to the punch and names his Top 40 greatest Texas Rangers of all time.

Finally, Tesfatsion gives us a heads up on how some the Rangers who didn't make the All-Star team plan to spend their summer vacation.