Ron Washington doesn't think that this is a particularly big series so who am I to disagree? It's probably too early in the season to proclaim this a huge series. Washington is probably right to downplay these three games as any more meaningful than any of the others the Rangers have played recently just for winning streak continuity's sake.

So, Ron's probably right, it's not enormous. If the best case scenario happens, the Angels do look a little more on the peripheral of the race, but with 60+ games to go, including ten more with the Rangers, there would perhaps be just enough time remaining to make it up. And yet, after this series, there's no way that the Rangers will face a deficit in the division. At the very worst case, they'd have their same lead that they had going into the All-Star break. So, there's some comfort in that fact and a little bit of leeway has been bought that the winning streak has afforded.

And yet, if the worst case does happen, and the Rangers only lead the AL West by a single game, that will mean that over the course of the entire winning streak and it's aftermath, the Rangers will have picked up one game in the standings. There's something exceedingly depressing about facing an old status quo after such heights and is something that I hope the Rangers avoid. Big series or not, it's the most important one the Rangers have played in many months.

At the very least, we've had a little bit of revenge for the summer of 2009.

I don't know if you want to remember the bloody details of the summer of 2009, but here it is: In the summer of 2009, the Rangers were contending for a playoff spot seemingly a year ahead of schedule and with a conviction of no other Rangers team since perhaps 2004. The Rangers led the division off and on over the first couple of months with the Angels hanging around with them. In fact, the 2009 Texas Rangers had a lead of 5.5 games on May 30th. It started to look like we'd be seeing October baseball in Arlington in the aughts yet. However, one June swoon, and specifically an Interleague road trip out west later, and the Rangers were again tied for first.

The Rangers would battle with the Angels over the next two weeks and on July 10 the Rangers held a half game lead. A week later, the Rangers were three games out of first. And here came the real kick in the testes. Down three games, the Rangers rallied and pulled off a five game win streak at the end of July. In doing so, they lost a half game in the standings. That's because the Angels were in the middle of winning eight straight games. Also, 17 of 20.

After that five game winning streak, the Rangers won three more to pull within 2.5 games. That was as close as they got to the Angels for rest of the season. A month later the Angels were up 6.5 and ended up winning the division by ten games.

In 2011, over the past three weeks or so, the Angels have gone 12-5 (a 114 win season pace) and lost 2.5 games in the standings. At one point, they went 8-1 and lost 1.5 games in the standings. I remember what it was like to watch a good team fall behind a better team even as the good team continued to win. It wasn't fun at all. Now the Rangers just need to do what those 2009 Angels did and continue to pull away. 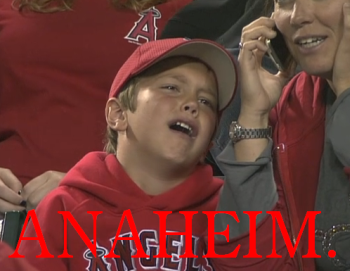