Much like the probable temperature on the thermometer at the start of the game, the Rangers will be playing game number 100 tonight. It's strange how the All-Star Game is generally considered the midway point of the season, and yet, there's only 60 something games remaining and we're just getting out of the All-Star break. This second half is going to fly by.

For the Rangers, this game #100 is against the Blue Jays, at home, and coming off one of the more unusual stretches of Rangers baseball we are likely to ever see.

Of course, there was the 12 game winning streak. But there was also the five shutouts in nine games played, the current streak of seven in eight games of allowing one run or fewer, and the game yesterday where the winning, and only, run was scored on a two out gaffe by Endy Chavez. That dropped ball eventually led to the Rangers dropping their second consecutive game for the first time since they lost to the Marlins on July 2nd and 3rd. The loss on the 3rd would be the last time the Rangers would lose until a fluky six run inning by the Angels did the Rangers in on Wednesday, and that was the first time the Rangers had lost to an American League team since June 16th. Weird, wild stuff.

It's likely just sample noise, but it does seem like the recent offensively powerful Blue Jay teams have been well suited to slug it out in Arlington and give the Rangers problems. Hopefully, if one streak can continue, it will be the Rangers recent pitching success and not Blue Jays success at the Ballpark. 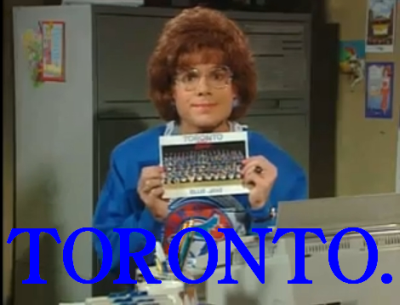