The Rangers are hitting a stretch of games where they will play 16 of their next 22 games on the road. Sandwiched between a two-series homestand against Cleveland and Seattle is a 10 game road trip against Oakland, Anaheim, and Chicago on the back end and fronted by the current trip which begins in Toronto. In this front end, the Rangers will travel to two ballparks where they have had the most surprising least amount of success this side of Target Field. In this case, the Rogers Centre in Toronto and Comerica Park in Detroit.

It used to be that you could count on the Rangers to often lose weird, terrible games at the Metrodome or Kingdome, but those former houses of horror no longer stand. Long have they been vanquished. Sometimes they show replays of ESPN's special about imploding the Kingdome on ESPN Classic. Replacing those domes in our nightmares is what used to be Skydome. Now it is called the Rogers Centre. Yes, Centre, not Center. It's not Center like any self-respecting arena because it has to be all Canadian and different. Since the beginning of the 2007 season, spanning now 4 1/2 seasons, the Rangers have gone 8-14 at the Skydome/Rogers Centre.

The other torturous stop of the Rangers current trek is Comerica which isn't a dome by a walled ceiling so much as it is domed by agony and despair. At one point between 2008 and 2010, the Rangers lost nine consecutive games at Comerica. Over the same span since 2007, the Rangers are 5-15 at Comerica Park. Whatever it is the Tigers do there, be it the home run suppressing cavernous outfield, the dirt strip from the mound to home plate, the hopeless masses ushered in with their last dime to forget the job market for a day game on a Tuesday, it works against the Rangers.

It doesn't take much thinking back to remember what it's like to suffer at Comerica. Just three months ago the Rangers were there blowing late leads, scoring the same number of runs as the Tigers, and coming away with a series loss and an injured Josh Hamilton to show for it. There isn't much about watching the Rangers play at Comerica that inspires much of anything other than the feeling of exhaustion.

Rogers Centre, like all good domes, is about oddity, not misery. Hence, therefore, it has the Rich Harden Smile game where the Rangers had leads of 3-0, 8-3, and 9-3 erased by the handiwork of Harden and Doug Mathis. (As an aside, you should totally check out who started that game for the Blue Jays. Also, check his pitching line.) Rogers Centre also has the debut of Darren O'Day in Kason Gabbard's jersey, a game the Rangers would lose.

The Blue Jays aren't among the better teams in baseball, and it is debatable as to whether or not the Tigers are. With that said, the Rangers have had as much trouble with them at their place that series like these cannot be overlooked. Playing well enough to beat teams the Rangers are better than on paper could be the difference between sweating out the final month of the season or not. However, if the Rangers continue to get tortured in Toronto, things could get tricky.

With the Blue Jays trading away Jason Frasor for Edwin Jackson, and then trading Jackson and others to St. Louis for Colby Rasmus and parts, an unintended aspect for us Rangers fans developed, with a series so near between the two teams, that saw one nemesis in Corey Patterson depart from the American League while we gained an old foe in Brian Tallet. It won't be too long before the Blue Jays have Trevor Cahill and 2004 Vlad Guerrero.

I think it goes without saying, but I really want the Rangers to May 14, 2010 Brett Cecil tonight. 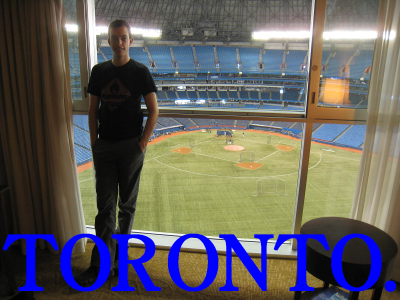