We're coming up on a couple of memorable anniversaries as we celebrate the anniversary of the birth of our nation today. Believe it or not, we're five days away from the one year anniversary of Cliff Lee becoming a Texas Ranger. As the Rangers begin this series with the Baltimore Orioles in a lurch, searching high and low, forward and backward for a way to string together wins, it's interesting that we're only five days away from a point last season where there was really no looking back.

In some respect, it seems like decades ago—a lot of that 2010 season is beginning to now—and yet, I still remember that day like it was yesterday. I remember waking up that morning thinking, "We got Cliff Lee." with no real reason for thinking so while rushing to check the news to see if I was right. I remember reading how late in the night Cliff Lee was set become a New York Yankee. Silly me. I remember feeling that familiar disappointment of the Yankees getting their guy again while realizing how foolish I was to have gotten my hopes up.

And then, after wallowing in Darn Yankees pity for a little while, Cliff Lee wasn't going to be a Yankee anymore. The deal was off. Instead, suddenly, the Rangers we're getting the single biggest landscape-changing mid-season trade piece that had come along in years. In fact, the Rangers were who Seattle wanted to deal with all along. Cliff Lee was going to be a Ranger, and after the initial worry of, "Justin Smoak?! Who's going to play first?! Blake Beavan?! AND TWO PROSPECTS?! WHO ARE THE OTHER TWO PROSPECTS!? Oh, it's that rape guy and someone named Matthew Lawson," there was nothing but excitement for October. Except for one small detail that ruined the honeymoon. The Rangers were in the midst of a four game home series with the Baltimore Orioles.

At the time, the Rangers were 50-34 and had just lost a heart breaker in the series opener to the 25-59 Orioles 6-4 after blowing a 4-0 lead by allowing a run in the 5th, 2 in the 7th, and 3 in the 8th. It seemed almost silly to care about a July game against the Orioles, that morning after, now that Cliff Lee was going to be a Ranger. In retrospect, it seems like the Rangers agreed. They went out the night of the Cliff Lee trade and lost perhaps the worst game of the non-World Series-loss-division of the season. You know the one. Again, up 4-0, and then 6-2 in the 9th, on one of the last slurves Neftali Feliz would throw until the ALCS, Corey Patterson hit a 9th inning game-tying grand slam. An inning later, Jake Fox took Dustin Nippert deep and the Rangers lost 7-6 in ten innings. It sucked.

However, Cliff Lee was going to pitch the next game for the Texas Rangers. So a fluky grand slam was an easy second fiddle to that pure joy. Except, then Cliff Lee gave up three home runs and six runs total in his debut and the offense didn't score for him until a lone run in the 8th. Whoopsadoodle. Jet lag, we assumed. And yet, here we were, watching the Rangers lose a series to the worst team in baseball with the best pitcher who had ever toed the Ballpark in Arlington rubber. And there was still one game left to go.

Ian Kinsler hit a first inning home run to give the Rangers yet another early lead. However, it lasted exactly four batters as the Orioles scored three runs in the top of the 2nd and the Rangers never scored again. Just for good measure, Miguel Tejada homered in the 9th inning to punctuate a 4-1 victory and a road series sweep.

So here we are, four days away from the anniversary of that series with a home series against those Baltimore Orioles. Some things have changed. The Rangers don't have Cliff Lee anymore. Other things haven't changed. The Rangers are still way better than the Orioles. Though they are only 44-41 and struggling in the present and the Orioles aren't the worst team in baseball and are easily ten games better than they were coming into this series than they were in the series last year.

I don't know about you, but I'd like to see the Rangers permanently destroy the Orioles hopes and dreams over the next three days. 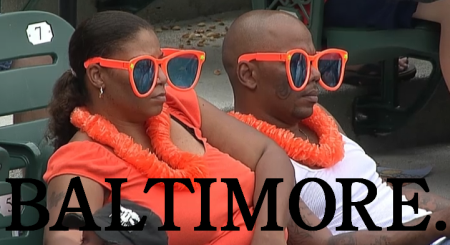