Would you believe it? There's only four games until the 2011 All-Star Game. This season is dangerously zooming by like a getaway car not slowing down for the curves. The Rangers have already passed the mathematical 81 game mid-season checkpoint and can now see the traditional halfway point with just a couple of yards of straightaway ahead.

For the Rangers, though, flooring it—regardless of terrain—is how they will win this race. Slow and steady just isn't their style. Thinking pedal-to-metal seems to favor them. It's the leisurely pace that seems to get them. Which brings them to this series with Oakland. Hopefully, after finally putting together an entire series effort against the Orioles, the Rangers go full throttle to close out the first half even with a pit stop so close in front of them.

It is, after all, called a race. And if you take the racing analogy further, where the Rangers would be the defending circuit champion who is trying to right himself, and maintain the current track lead, after hydroplaning on a slick course, then that would make the Angels the oft-winning veteran driver gunning for one more title with a demanding crew chief after falling out of the race last season. The Mariners would be the rookie upstart driver who crashes during the first lap he's ever led.

Which would make these Athletics what? The preseason pace car that veered off, hit a wall, and crashed and burned before the race even began? Let's not forget that between two weeks to go in Spring Training and up until opening day, the A's had become the popular trendy pick to win this AL West race. I won't overstate it. The Rangers were still probably considered the favorites. But the A's had become the "we don't want to pick the favorites because the AL West is so wacky!" team.

Now, however, the A's are eight games back in the standings and their best position player by WAR this season has been Coco Crisp. Or, you know, worse by WAR than Alberto Callaspo. Yuck. And yet, with four games to go until the break (Thanks, Gerry Davis!), all against the team in first, the A's have an opportunity to pull their backup car out of the garage and get back on the lead lap. It's up to the Rangers to step on the gas and put them in the rear-view mirror.

Obviously, as a division rival, the Rangers should be familiar with the A's starting rotation. However, this is a little silly. Right now, three of the five members of the A's rotation (Guillermo Moscoso, Brandon McCarthy, and Rich Harden) are pitchers whose last uniform before the green and highlighter yellow of Oakland was that of the Texas Rangers. In fact, all three pitched for Oklahoma City, the then Triple-A team of the Rangers, at some point last season.

Moscoso pitched decently in ten games out of the bullpen for the Rangers in 2009 before getting two outs in seven batters faced in one appearance with the Rangers in 2010. Now Moscoso is an Oakland Athletic and currently has a respectable 4.31 FIP in 50 innings pitched as a starter. The Rangers won't face him this weekend but chances are they'll see him at some point this season.

McCarthy couldn't stay healthy in Texas and finally just ran out of options here. Now McCarthy is in Oakland and doing what Brandon McCarthy does; he's pitching well when he isn't hurt. McCarthy, in his ten starts and 70.1 innings of work for the A's has been worth two wins, has a FIP of 2.64, but because he pitches for the A's, has a record of 1-5. McCarthy last pitched in the majors in 2009 for the Rangers. He'll face off against his old team on Saturday night.

Harden was kind of always an Athletic anyway so he's hard to claim him (as much as I'd like to). Plus, he smiled that one time. The gravest of sins for Canadian pitchers. Harden goes tonight for the A's in his second start of the season. Perhaps he'll wear his 2010 American League Championship ring on the mound, though.

We also know plenty about Gio Gonzalez and Trevor Cahill but that's only enough to say screw those guys.

Oh most glorious of days! No longer do the Rangers have baseball's worst bullpen! In fact, while that distinction now belongs to the Astros, the Twins have managed to pitch poorly enough out of the pen to tie the Rangers for bullpen futility. However, thanks to the beauty of alphabetical ordering, the Rangers are listed as the 28th "best" bullpen in baseball. What a jump! You're next, St. Louis. The Rangers are coming for you, Baltimore. Look out, New York Mets. Say your prayers, Detroit. The Rangers bullpen is back, baby! 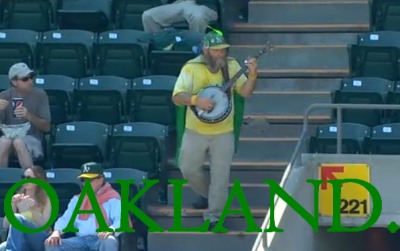