With all of the sweating, teeth-gnashing and hand-wringing produced by a late July swoon from the Rangers (5-7 from when the 12-game winning streak ended until the trading deadline), the calendar was circled for this four game series against the Angels as the most important series the Rangers will have played since last October. This was to be a landscape shaping mid-August series the likes few Rangers teams or Rangers fans had ever seen. There's probably little doubt that this is all still true. Warning shots had been fired, after all.

But, thanks to a current stretch where the Rangers have rebounded, having won eight of the last ten games, things look a little less urgent even if these games will feel like they are played with a sense of urgency. As it turns out, though, after this run of well played baseball that has the Rangers back up four games in the AL West, this series shapes up to be not all that different from the one the Rangers and Angels played about a month ago.

Here are some important similarities: When the Rangers traveled to Anaheim on July 19th the division lead was also four games. When last the Rangers met the Angels, the Angels were coming off a surprising series loss (In that case, losing three of four to Oakland. While this time, losing a series to the Blue Jays with the losses coming in games started by Jered Weaver and Dan Haren). That July 19th game pitted Alexi Ogando against an Angels' rookie starter. The series opener tonight is again Ogando vs. an Angels rookie starter. Weaver will pitch the finale just as he did last time.

Here are a few important differences: The Rangers will not face Dan Haren this time. Instead, they will face both Angels' rookie starters and Ervin Santana. It is now nearly a month later in the season and therefore a bit more meaningful. However, it could be stated that since it's a month later, and the Angels have gained no ground on the Rangers, the opportunities afforded to each team with success in this series is quite clear. If Rangers do well, the AL West pennant race begins to look a little more like 2010's race, and if the Angels do well, there's actually a race to speak of again.

It's easy to see why this is an important series. But with that said, there's something comforting about knowing the absolute worse thing that could happen is seeing the division tied again. It's nice knowing that of the scenarios, none of them end with the Rangers out of first place. However, while having peace of mind is a happy thought for the race-weary fan, I'd like nothing more than to see the Rangers bury the Angels now. There's no reason to fall back on worst-case when any of the better cases puts this division nearly out of reach. The Angels have gotten by on the kindness of the Rangers' satisfaction with just having a lead for too long.
No one could fault either team for coming out and treating this a little bit like October, only 4 of 162 or otherwise. It's going to be big.

The Rangers run differential is +114 which is good enough for a Pythagorean W-L of 72-49. The Angels have a run differential of +11 which is good enough for a Pythagorean W-L of 62-59. In a world where things make sense, the Rangers would have a ten game lead on the Angels and this series would only mean going to their ballpark to dance on their grave. However, baseball isn't a world that makes sense and here we are. But before we despair luck and anti-luck alike, it's good to remember that with the otherwise inexplicable tightness of this division all season, the Rangers have still led in the West for all but ten days. That in itself is pretty remarkable and probably incredibly frustrating to Angels fans and Angels players alike.

And, four days from now, the Rangers will still be in first place. 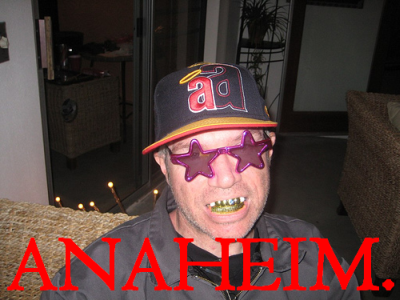 SB Nation Angels Blog: Halos Heaven (How about no?)