Where's Dave Valle asking, "Are you willing to do what it takes to win?" when you need him?

This is familiar. It seems like every other week there's a series against the Angels that will determine the lead in the AL West. The Rangers have done well enough the previous two times they've faced the Angels in such a scenario, winning 4 of 7, but there's a reason this one feels different.

There's a good and bad side to this series being played later in the season than the other series against the Angels. The series the Rangers played against the Angels in late July and the series the Rangers played the Angels a week ago have set up what we can expect to see this weekend, and since the Rangers have the lead in the division and it's later in the season, there's a better chance of tacking on a lead that sticks simply because there will not be as many games left to play for the Angels to mount a comeback. However, on the flip side, if things go badly in the series, as they have been going since the Rangers left Anaheim, there will be less time for the Rangers to make up any deficit. The Rangers will have a month to play catch-up unlike the Angels who have been trying to come back for the entire season.

And yet, to me, even though the Rangers' offense looked like it was pressing to keep up with a superior offense in the Boston series, and some of the starters look dead on their feet, it's the Angels who seem concerned coming into this series. They have a six game winning streak and the momentum—supposedly—but their actions seem to describe a sense of worry that this is their shot or at least a concern with keeping it close.

It's been nearly four months since the Angels last found themselves in first place. So, I understand going for it. But the fact that they are likely going to start Ervin Santana (having already thrown 115+ pitches per start in four of his last five starts and 582 pitches total in August compared to 529 total for the entire month of July) and Jered Weaver, (having allowed more runs this month than in any month since May—though most of that in one start) on short rest for the first time in their careers, just smacks of a premature push. A successful return on the investment of their pitcher's arms—easily their long-term advantage over the Rangers—has the Angels up a game in the standings with a month left to play and facing the prospect of a couple of worn out pitchers.

I understand that getting as many innings out of Dan Haren, Santana and Weaver as the Angels can is a necessity for them to win this division, but this kind of tactic seems a little early on the calendar. Though it will have to play out, there's a possibility that it works for the Angels in the short-term but the Rangers in the long run. I'm interested only in the long run. And if the Rangers take even one game? It didn't even work out in the short-term.

Here's hoping these Rangers take a page out of the 1996 Rangers and answer Dave Valle's question with a, "Yes, sir."

Here's a breakdown of the pitching match-ups against the frightened Anaheim Angels:

Advantage: C.J. Wilson on regular rest over Ervin Santana on three days rest after throwing 582 pitches in five starts in the month of August already 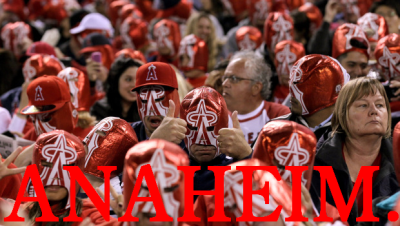