The Rangers finally had a precious day off yesterday after playing baseball games on every day consecutively since the 12th of August. In that span of 17 straight games, the Rangers started 6-1 against division rivals Oakland and Anaheim and everything was looking peachy. Then the Rangers started to look a little tired. You probably read that it was Mark Trumbo's walk-off home run for the one loss in those seven games that took the wind out of the Rangers' sails. Or maybe you heard it was the west-to-east late night flight from John Wayne Airport to O'Hare International that jet-lagged the Rangers. Whatever it was (it was the starting pitching) the team hit a a 2-5 skid in their next seven games.

That set up a final three games series against the Angels before the Rangers could take a momentary siesta with us sweating out whether we would see the rampaging Rangers or a tuckered out Texas team. Of course, we know now that the Rangers slugged out a series win against the Angels troika of aces to finish the 17 game marathon with a 10-7 record. If you count the half game the Rangers picked up last night, the Rangers even gained 1.5 games in the standings during that stretch.

Every starter—a group so consistent all season—had a horrific start in the final few games of the 17 game stretch. Derek Holland kicked things off by allowing 5 ER in 3.1 innings in Chicago. In three consecutive games against the Red Sox, Colby Lewis, Matt Harrison, and Alexi Ogando allowed 20 ER in 15 innings. Boston's offense, you say? Well then C.J. Wilson had arguably his worst start as a starting pitcher when he allowed 6 ER and 4 HR in 5 innings to the average Angels. So now we have questions of dreaded dead arm, fatigue, and uncharted water for some in number of innings. The answer so far is the question: Hey, remember Scott Feldman? We really don't know what the starting pitching will be like going forward. That's a concern.

Also, the Rangers are going to be without Nelson Cruz for three weeks. So, unless we see a surprise pick-up of Lance Berkman in the next few hours, that will leave a hole in the lineup no matter who replaces him.

For as much as this devilish schedule is meant to derail the Rangers, the team has a 38-19 record this season against the remaining combatants on the schedule. There's not a single team left that the Rangers have a losing record against this year. The worst of it—the next 9 games—is this home and home set against the Rays book-ending a road trip to Fenway sandwiched in the middle. The Rangers are 6-4 against those two teams so far this year.

I'm crossing my fingers so hard that I think one of the fingers just broke off but this could be the final series preview that I write before Adrian Beltre returns. It's like the Rangers are making a pre-waiver deadline deal and it's for the best third baseman in the league. And it's Adrian Beltre. I can't wait.

Oh, and, AccuScore's updated Playoff Projection Odds give the Rangers a 94.5% chance of winning the AL West.

Here's a breakdown of the pitching match-ups against the hard charging Tampa Bay Rays:

Advantage: Jeremy Hellickson having three previous starts over Scott Feldman not having started a game since Sept. 28th 2010

Advantage: C.J. Wilson being an ace in the AL this season over Jeff Niemann being pretty good 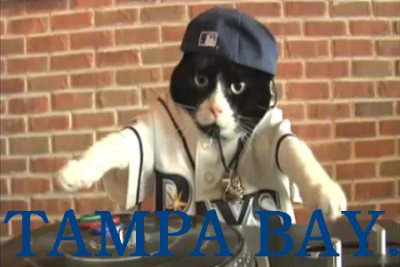