Down to the wire division races are tough. They try your belief in baseball. True talent wins out in the end, right? Teams don't just become magic, regardless of how magical any winning season seems, right? There aren't actually angels in the outfield, right? Division races are not easy to watch because division races are relentless for months and then, suddenly, it ends. And when the dust clears, you might not like what you see on the photo finish. A good baseball race refuses to allow you to look away, however, because your emotional stakes are so high. There's a lot riding on this.

Try pretending for a moment that you were a fan of the 1993 San Francisco Giants. That team won 103 games and failed to make the postseason. Nearly ever day that Giants team won a baseball game, and yet, the Atlanta Braves won one more. 161 games came down to the final game of the season. The Braves won. The Giants lost. 162 games, 103 wins, and an early vacation. I can't even imagine. And yet, I assume that season was way more fun and infinitely more memorable than the 2003 Texas Rangers were.

Maybe it's been a blessing all along. With a near complete history of total mediocrity, the Texas Rangers have all but avoided division title races for its entire existence. When the team has won, they've tried their best to make it easy on us, or at least the rest of the American League West has. At the very least, it's been a little over a decade since we've truly sweated out a race to the finish line that saw the Rangers come out on top. After the jump, I've written a complete remembrance of the Rangers division races over the length of their 40 years in Texas. It helps to look at the past sometimes to gauge how to feel in the present.

The very first time the Rangers were a success, in 1977, they led the division on August 18th, only to find themselves 10.5 games out a month later. No real race there despite that team winning 94 games. A year later, the 1978 Rangers went 18-4 from September 11th until the season finale and managed to gain 2.5 games in the standings, finished in 2nd place, and still lost the division to the Kansas City Royals by five games. No race here.

In the strike shortened season of 1981, the Rangers were within a half game of first place as late as August 29th, and yet were never in first for even one day that entire season despite never trailing by double digits once all year. The Rangers finished in 2nd place and five games back once again. The 1986 Rangers were 1.5 games out of first on August 14th but nine games out a month later before finishing, you guessed it, in 2nd place and five games back.

Perhaps the 1994 Texas Rangers would have managed the franchise's first true division race. Of course, considering they went into the strike on August 11th in 1st place with a record of 52-62, it would have been one of the worst divisional races in baseball history. The 1996 Texas Rangers fall on the opposite side of the spectrum almost. While that team was up nine games in the division as late as September 11th, only to see the lead drop to one game by the 20th, the Rangers won the division by 4.5 games and were only in anything other than 1st place for a total of three days and never trailed for more than a half a game all season. While the end of that season made it a race, it was clear the Rangers were the best team in the AL West that season.

In 1998 the Rangers were in for a race to the end. The Rangers led the division for much of the first half of the season before finding themselves in 2nd place by mid-June. The Rangers never trailed in the division for more than 3.5 games and were back in first by August 1st. The second place Anaheim Angels never trailed in the division for more than six games and they retook the lead on August 14th and they held it until the 14th of September. The Rangers trailed the Angels by 3.5 games on September 6th before going 12-5 over their next 17 games, including sweeping five games against the Angels, to with the division by the 25th of September. This was truly a back and forth division that came down to the end for the first, and maybe only, time in team history.

The Rangers ran away with the division in 1999 (Another true first for the franchise) having never trailed past April 12th, finishing with a franchise best 95 wins, and winning the division by eight games. It wasn't until 2004 that the Rangers would even compete for a division title again. That season's final month is remembered fondly perhaps because of the lack of division races in franchise history. The Rangers led the division that year as late as August 5th (Happy Anniversary!) but had trailed for much of the year. However, have being down as much as 6.5 games as late as September 6th, the Rangers were able to whittle the lead down to as few as two games as late as September 26th. The Rangers went 4-6 over their last ten games and finished in 3rd place and three games back.

And then 2010. As much fretting as there was about the division lead all season, the Rangers rolled to the division title. It wasn't close after mid-June. And that's been it. That's been the complete history of Ranger division races. There's been two division wins with exciting finishes, two division wins in blowouts, a season where the team made it close late only to falter at the finish line, and a few random seasons where the team hung around but a race never truly developed.

It could be any of these things that happen. More likely, though, it will be something new that we see. It could be that the Rangers and Angels form a pair in a great race the likes that we've never seen as Rangers fans. It could be that true talents levels carry the Rangers ahead in the coming weeks and we forget that it was ever even close as the years go by. But one thing is certain, I feel, whenever there is worry or concern about what might happen over the next seven weeks or so, is that it is far better to feel the churning stomach ache of contention than it is to feel the empty hunger pangs of meaningless September baseball starvation.

A division race does us good. 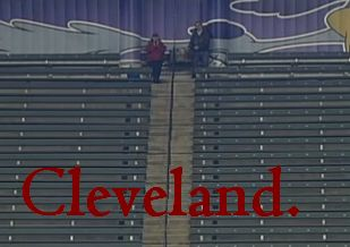