Believe it or not, there's a chance the Rangers celebrate on Oakland's field again.

Last year, for me, that was the best case scenario because it meant that I got the witness the Rangers clinch the American League West division title, for the first time in over a decade, in person. That's a moment that I'll never forget. I still remember the exact moment that I was certain the Rangers were going to clinch that day. It was the top of the 7th, and Elvis had scored from second on a wild pitch to put the Rangers up 3-1. It just seemed like that was how it would end. So, once Clay Rapada had gotten two quick outs in the bottom of the inning, we BARFers (alon91, Baseball North, and I) decided to move down from the West Side Club to find NorCalRangersFan who was sitting with his family near the Rangers dugout. It was 3-1 Rangers and they were about to win the West.

We didn't even get to the stairs before Rapada had walked Landon Powell. I turned and looked at the TV screens above the bar in the West Side Club just in time to see Cliff Pennington shoot a ball over the left field fence to tie the game. There was no turning back now, however. We made our way through about 20,000 Oakland A's fans who seemed happy that our celebration had been put on hold for the time being. Along the way, I ran into tlt29, an old ESPN Boardie of legend and fame whom I had never met before but he recognized me. It was very surreal. We ended up hanging out in his section in the shade as we hoped the Rangers would re-take the lead in the top of the 8th.

Ian Kinsler walked but was erased by a Jeff Francoeur double play. As we tried to pinpoint where NorCalRangersFan was sitting, Jorge Cantu came up fresh off his first RBI as a Texas Ranger earlier in the game. As you and I know now, it wasn't his last. Cantu hit a ball to deep left center field on a 3-2 hanging slider from Michael Wuertz. I remember thinking, "That's a double." But, for once in the history of the Oakland Coliseum, the ball carried. I can still picture in my mind the ball disappearing behind the 388 mark of the left field wall. Later, when I was back home, it would be Josh Lewin's "Jorge...CANTU hits it out!" call that I remember so well.

At this point, we were desperate to get closer, closer, closer as the A's went quietly in the 8th thanks to a combined Darren O'Day/Neftali Feliz effort. We made our way down to the lower bowl of the stadium. The ushers knew we didn't have tickets there but they let us go because they knew why we wanted to be there so badly. In the bottom of the 9th, with Feliz being asked to get a four out save for only the second time that season, he got Chris Carter out swinging before Jeremy Hermida lofted a ball to center that looked like an easy out number two. Julio Borbon misplayed the ball and Hermida ended up on second for a gifted potential tying run. Like it was ever going to be easy, right?

After that gaffe, we tried to get a "Let's go Rangers!" chant going to rally the troops as several dozen Rangers fans had flocked toward where we were as they hoped for the end to come quickly. Feliz got Jack Cust to pop out to shortstop and the Rangers were one out away. You know what happened next. Cliff Pennington was up and trying to put a dagger in our hearts once again but could only lift a lazy fly ball to the waiting glove of Nelson Cruz. "That's it! That's it! That's it!" "The A.L. West title flag will fly in Arlington, Texas!"

We screamed, we hugged, we ran down to the corner of the dugout to watch every Ranger congratulate Ron Washington and Michael Young. Suddenly, RangerMoto was there. I had never met him before either and I think I hugged him. Sports. A little to my left was Chuck Greenberg and Jon Daniels. A little to my right was Tom Grieve and Nelson Cruz tossing his battling gloves at the hundred or so Rangers fans still chanting. Somewhere along the way, a bitter A's fan had stolen my vuvuzela.

I hope the Rangers do clinch. I just hope it doesn't happen in Oakland again. That's a memory that deserves to be made in Texas.

Here's a breakdown of the pitching match-ups in this series against the East Bay A's:

Advantage: I know better than to give any Ranger an advantage over Trevor Cahill 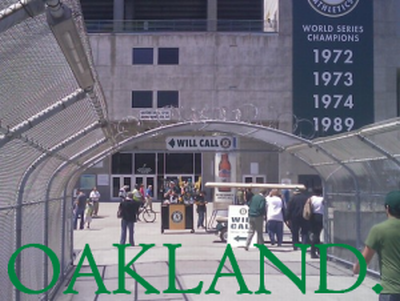