Adam wrote all you need to read about how you should feel about your Texas Rangers coming into this series yesterday. But what of these Tampa Bay Rays? They've been enjoying their share of sandwiches lately. I'll admit, as I watched things unfold on Wild Card Wednesday, three hundred and sixty or so days had seemingly muted any feelings of hatred I once held for the Rays after last season's five game ALDS. I found myself enjoying the audacity of the moment on their behalf.

That Game Five of the 2010 ALDS -- obviously because the Rangers won that game and the series -- dulled the memories of David Price and James Shields whining from the dugout. Cliff Lee and Nelson Cruz took the Rangers beyond a place where Joe Maddon's stall tactics could bother us in hindsight. Ian Kinsler skipped and Elvis Andrus scampered their way by the taunts of Andy Sonnanstine. The fact that the Rangers won a playoff series for the first time in team history in Tampa Bay definitely helped to erase what would have been a lifetime of contempt had the Rangers lost.

Now these Rays are back. We should have known the book wasn't finished after just one chapter. But how could we? The fact that they are back here, honestly, is a miracle. We can say that and it not be hot-dogging or downplaying the opponent because they would admit to the same thing. We were told that the Rays wouldn't be able to maneuver back to this point because of the personnel they lost after last season. 2010 was supposed to be the last run of the Extra 2% Rays while they spent a couple of seasons rebuilding. They knew they were contending with a revamped "Best Team in History" Red Sox team. And they always know on day one of every season that they have the Yankees to worry about. Just dealing with the season in abstract, it sounded like a long shot. But what they did to actual accomplish the opportunity to face the Rangers again is beyond rational. It was supernatural.

You want odds? Nate Silver's numbers had their march to the Wild Card at a 1-in-278 million chance of happening. Or, as noted here, higher than any of these things happening to a Tampa Bay Ray:

But now that they are the Cinderella Rays, and now that the Rangers do have to beat them again, those feelings are sharp again. The Rays might have lulled me into a false sense of loving baseball because of their miracle, but now that it is these Rangers against those Rays again, I don't have to feel good about the feel good story anymore. I know a bunch of Rays will step out of the box on C.J. I know James Shields and David Price will be intense. I know that Sonnanstine we'll throw up some Antlers up from his couch on a crucial play.

Here's a breakdown of the pitching match-ups for the Rangers v. Rays ALDS: Pt. II:

Advantage: C.J. Wilson being the best starter in this series over Matt Moore's ????????ness

Advantage: James Shields being the second best starter in this series over Derek Holland being the X Factor

Advantage: David Price being the most talented starter in this series over thank god Colby Lewis is pitching on the road

Why The Rangers Will Win: Because momentum doesn't exist and the coin flip is weighted toward a better Texas Rangers team with home field advantage.

Why The Rangers Won't Win: Because momentum exists and the Rays still have some of that magic bean/pixie dust/Destiny's ball sweat left for the ride to keep rolling. Also, they're actually pretty good. 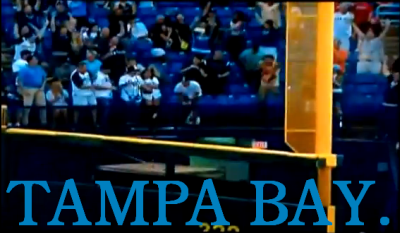