There's an amazing lack of games remaining in this season. 18 games separate us from this moment to the end of the 2011 regular season. Oh how the time flies when you're winning.

If you imagine back to a decade ago, in the first year of A-Rod and the Rangers-with-money experiments, on game 145, the Rangers were 39 games out of first place. That's because the Mariners were a historically great, but I'd imagine you stopped living and dying by Texas Rangers baseball by mid-May that season.

The season after that, in 2002, by mid-May the Rangers were already 9 games out of first. Another lost summer. Surely you still watched here and there. You still checked the score in the paper (people still read the paper then, you see). But the baseball season dragged on and on forever because the Rangers sapped you of all hope. They talk about going to the playoffs as a chance or a race throughout the season. For those early '00 Rangers, it was a death march.

In 2003 the Rangers went 7-20 in June. They were 12 games out of first when the month began and 21 games out of first when the month ended. They had the best player in baseball, however. So, while the Rangers lack of success robbed you of your passion for pennant race baseball, you might have missed one of the top five players of all time, in his prime, playing historically great baseball every day while you waited for the franchise to turn things around. Even with A-Rod the season felt 100 games too long.

Having been parched in the desert of meaningless baseball for so long, 2004 was our oasis. Those scrappy Ryan Drese, David Dellucci, and good Hank Blalock led Rangers were in the race all season long. They were in 1st or 2nd place all season until August 9th. They never trailed by more than 3.5 games during that span. However, by September 6th, they were 6.5 games back chasing superior A's and Angels teams. Of course, a fan-favorite Dellucci double later and they were only 2 games back on September 23rd. Unfortunately, even a lead as small as 2 games is difficult to overcome when you're playing above your talent level with so few games remaining. Sound familiar?

From then to now we've seen more bad teams (2007 to Ron Washington's birthday in 2008 come to mind), a couple of completely forgettable if not mediocre teams (Complacency at its finest; the 2005-2006 final years of Buck Showalter), before finally a spark of contention returned to Arlington with the 2009 team.

From 2009 to now, it has been a blur. Maybe it is because the Rangers have so much of my care or maybe it is because it's harder to tell where April begins and September ends when there's exciting and meaningful baseball every day instead of a box score you check later out of a sense of duty while thinking, "They're still playing baseball? They still do that? The Rangers are 18 games back. Why would they still be playing baseball?" But stopping to acknowledge where all of my summer nights have gone has made me stop and consider how much fun it is to follow such a rewarding team. I must be sure to pause in an attempt to enjoy every moment of it because I don't think I ever will at the rate we're going.

Here's a breakdown of the pitching match-ups against the someday Portland Pioneers:

Advantage: Alexi Ogando on full rest with the Wedge on his side over Trevor Cahill's delicious regression 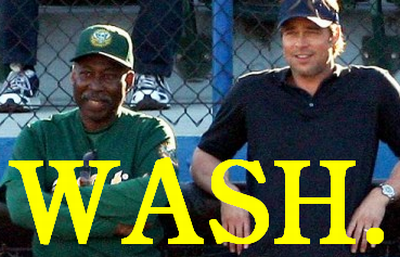